3D Printing Chocolate: What you need to know 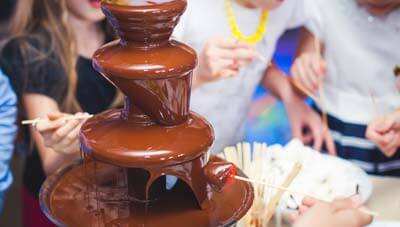 Everyone loves chocolates. Chocolates are one of the purest forms of showing your love and affection. What if you have the power to customize chocolate for your loved ones like a name spelled out in chocolate? Tempting, isn’t it?

Chocolate 3D printing is quite a new application. It forms a very niche section of the 3D printing industry. But just the sound of it generates excitement to one and all. The traditional chocolate manufacturing process involves pouring melted chocolate into pre-designed molds. Once the chocolate solidifies, it takes the shape of the mold. Molds limit the range of shapes chocolate can achieve. This makes all the chocolates look almost similar in shape and size.

Conversely, a 3D printer brings freshness to the industry as the technology eliminates the shape limitations and all kinds of abstract shapes and designs can now be 3D printed with chocolate. This has led to the widespread excitement around chocolate 3D printing.

How it’s done? The Process

In terms of the material, there are three types of chocolate; White, Dark, and Milk Chocolate. All three types have varying viscosity and so each has to be heated at an ideal temperature when 3D printing to have a consistent flow throughout the process. This requires a lot of trial and error on part of the operator to get a successful chocolate 3D print.

Chocolate 3D Printers in the Market & How Much Do They Cost?

byFlow, is a family-run business founded in the Netherlands in 2015. It is one of the global leaders in 3D food printing. One of its most successful products is the Focus 3D Food printer.

Focus 3D printer is portable, easy to use, and maintain with great design and sleek look. This 3D printer is used by many top chefs across the world for printing food items. Focus can 3D print with chocolate and any other similar paste. The printer uses a syringe to dispense the chocolate paste onto the build platform where the design is traced to form the object.

The company has created a list of sample recipes like chocolate ganache to get started. This recipe can be easily downloaded from their library and can be 3D printed in as little as 15 minutes.

The Focus 3D Food printer costs around $4,599 but it comes with 10 food safe and refillable cartridges, 4 nozzles in 2 different sizes, 5 food designs to get started.

ChocEdge is developed by the technology & creative design team from Exeter in the UK. The Choc Edge Limited Company founded in 2012, unveiled their first commercial 3D printed in the same year. Through their expert team, they continued to develop a better version of their 3D printer and in 2021 they launched a new model named Choc Creator V2.0 Plus.

This 3D printer costs around GBP 2,380 (approximately USD 3,200). This also includes some accessories like a syringe and nozzles.

CHOCOFORMER is another chocolate 3D printer built by students and engineers of OST University of Applied Sciences Rapperswil in Switzerland. It is a premium chocolate 3D printer that can create 3D chocolate objects. It is made for every type of user from a hobby confectioner to professionals.

This printer makes use of melted chocolate filled inside a tank. A dosing screw extrudes the melted chocolate through a nozzle to trace the geometry of the design layer by layer till the model is created. It is fitter with a stirring unit that keeps the chocolate in motion to maintain its consistency.

ZMorph is a Polish 3D printing company that develops 3D printers and software. One of their offerings is the ZMorph VX - an all-in-one 3D printer, CNC Mill, and Laser Cutting Machine. The full set of ZMorph VX comes with 5 types of extruders out of which one is a thick past extruder.

This extruder has the ability to 3D print with any thick paste material including melted chocolate. However, care should be taken to verify if the printed model is edible or not.

Procusini is a German manufacturer of 3D Food Printing Systems. They develop 3D food printers for professionals. Their Procusini 3.0 printer can print in chocolate but also in other materials like pasta, marzipan, fondant, or for that matter any other paste that has the required consistency and the printer will get to work. It is considered to be a smooth operating plug-n-play printer.

The interesting part is that this printer also comes with a dual extruder version. With this added feature, attractive designs can be made possible by using different color chocolates in both the extruders.

The Miam factory team members are experts at creating complex chocolate shapes using 3D printing. Whether it is a name, or a company logo, or a message, the factory can turn it into chocolate. The chocolate is ready-to-east right off the printer and so it hardly takes any time to order and eat.

Mona Lisa 3D Studio is the world’s first-ever chocolate 3D printing studio where the team converts its user’s designs into a delicious chocolate shape. With their prowess, the team can also print at scale. Additionally, if any user wants to co-create a design, then the team helps them to explore new ideas, shapes, and experiences.

The studio is opened to create never-before chocolate experiences for its customers.

The Hershey Company is one of the world’s largest manufacturers of chocolate. In 2015, it collaborated with 3D Systems, the world’s first 3D printing company, to develop a chocolate 3D printer – CocoJet.

The CocoJet was designed to 3D print with dark, white, and milk chocolates. The chocolate material could be converted into any complex shape by the 3D printer. During the early days, visitors to Hershey’s Chocolate World Attraction could customize their chocolate bars with personalized messages.

On World Chocolate Day in 2019, Cadbury launched a milk chocolate 3D printer. The 3D printer operated like many other chocolate 3D printers where a paste of chocolate is filled in a syringe and then deposited onto a build platform to form the object. This was an event hosted by the Cadbury Dairy Milk team from Australia where they showcased the printer by printing popular Australian symbols such as kangaroos.

3D Printing Chocolate: What you need to know