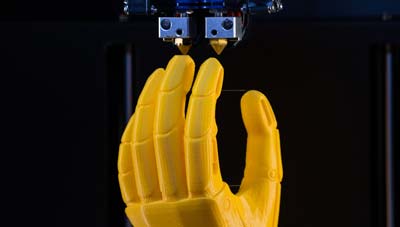 Printed 3D prosthetics are taking the world by storm for their cheap costs and durability. While 3D printing is relatively new in prosthetics, it is changing what prosthetics are capable of. Options for 3D printed prosthetics can seem limitless with new designs and materials being used every year, but there are some common choices to work with.

The most common material for a 3D printed prosthetic upper limb is ABS for its low cost and lightweight material. Lower limbs require strength and are often made with nylon. Prosthetic designs and functions are always changing as well, but non-bionic prosthetics are most common.

As other options for prosthetic materials are explored, it is hard to tell which are best. There are also bionic options that, while more expensive, still put traditional prosthetic prices to shame. If you need more information on your choices for 3D prosthetics, read on to find what can work best for you.

The Most Common 3D Printed Prosthetics

3D prosthetics are designed to conform to whoever will be using them. This field is quickly growing, but after years of practice existing, experts are coming to a consensus on what works best. Depending on what you need, you will find yourself with different options. For starters, you will have options for material and design:

Your options do not end there. Oftentimes people have a role to play in the design of their own prosthetic device. Most who use services such as e-NABLE will find themselves with the tools needed to create their 3D print based on previous designs and community input.

How Common are Bionic Prosthetics?

Bionic prostheses are not as common as alternative designs due to their cost, but the 3D printing community has begun to change this in recent years. Myoelectric prosthetics can be designed with 3D printing technology, though they have a greater cost than standard 3D prints.

Since myoelectric technology can be 3D printed, it has become worth it for some to use it for themselves, but it is not as widely spread as other options. Communities and businesses have rallied around the idea of 3D printed bionics, however, and while the cost can be a lot, it is nothing compared to non-3D printed electrical prosthetics.

Options like Open Bionics’ Hero Arm can be a couple of thousand dollars, but as a 3D printed prosthetic, this is much cheaper than alternative bionic options. Soon enough, myoelectric prosthetics may become more widespread than standard prosthetic devices.

Your material options usually depend on cost, but what also matters is which part of your body you need a prosthetic for. 3D printing has eliminated much of the cost of prosthetics, so your options are greater. Here you can find a rundown of the most common prosthetic material:

Materials for a 3D printed prosthetic are typically cheap, and both ABS and nylon are fine options. While nylon would be most people’s first choice, assembly of ABS material kits can be simpler and a fine option for those who need them.

With 3D printing still new on a mass scale, some are wary about using this service for prosthetics. There are some organizations that are attempting to get rid of the guesswork that comes with 3D printing, but these groups are still young. It is worth noting how they differ and how one may be better than the other:

Your choices are limited with 3D printing, but you do have some options. 3D printing is an emerging field that can spell the end of over-expensive protheses, but it also requires thorough research. Some may just want access to professionals. Your choice of whether to adopt 3D printing may come down to cost at the end of the day.

Designs can vary wildly in the prosthetics community, but for upper limbs, there is some more organization. Large groups like e-NABLE have standard, common designs that make it easy to navigate and decide on. Some of the most common designs are listed below:

Of course, there are far more options than just wrist and elbow devices. For those with any kind of limb difference, 3D prosthetic designs exist or can be made. These designs, involving the movement of muscles, are simply the most common for hand prosthetics, but plenty more are out there.

This does not mean there has not been some trial and error already. To 3D print, something like a prosthetic leg takes a lot of scanning and measurements, but it is still faster than conventional options. Certain designs exist for home-printing, though professional assistance is suggested.

Many 3D printed legs and feet are prototypes, and as the industry grows, they will become more common. 3D scanning is being used by many groups to better fit people with their prosthetics. Lower limbs require strong material, but as 3D printers advance, home-printing may become a better option for those who need it.

3D printed prosthetics are the way of the future and are becoming more and more abundant. There are many design options for these prosthetics, but this new industry has more choice for those requiring upper limb prosthetics.