3D Printing? How about 4D Printing or 5D Printing 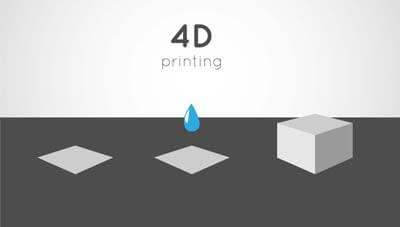 As the world rapidly adopts 3D printing technology, we are introduced to two new technologies – 4D Printing and 5D Printing. Though early in their development, they show even greater promise in the coming future.

4D printing and 5D printing carry a lot of intrigue around them but are relatively lesser known than 3D printing. So, we aim to shed light on these technologies and explain how they differ from the popular 3D printing technology.

By now everyone knows about 3D printing. It is a manufacturing technology that converts a digital CAD file into a three-dimensional solid object in a layer-by-layer process. This revolutionary technology is disrupting how products are manufactured and already it is being adopted on a wide scale across multiple sectors by numerous industries.

The 3D printing technology is distinguished by its approach to building products where the material is added instead of subtracted in the case of traditional processes. This addition of material imparts an advantage of creating complex shapes previously not possible. Moreover, as the material is added, it does not waste material thus saving costs. By combining the technology with software advancements like topology optimization and generative design, the total material usage can further be reduced saving overall time and cost.

With all these advantages, there are also some limitations to the technology. The 3D printing follows a layering process which means that the 3D printer deposits a 2D layer one above the other to form the 3D object. These layers are always flat. Due to this a 3D printed object almost always is strong in the X & Y-axis but weak in the Z-axis as this strength depends on the strength of the bond between individual layers. This is a serious problem and has to be taken into consideration when designing a part that will be manufactured through 3D printing.

As the name suggests, 4D printing is 3D printing with the addition of one more dimension. This new dimension brings a whole new level of functionality to the manufactured products. It also brings new applications into play and that’s where its advantages lie.

The fourth dimension is time. A 4D printed object can transform over time. The transformation is triggered by heat, electricity, light, moisture, magnetics, gravity, or any other form of energy. This external stimulus is essential to reshape the 4D printed object.

The Invention of 4D Printing

There is no single eureka moment for the invention of 4D printing but one of the most popular research that can be attributed to its large-scale awareness is MIT’s Self-Assembly lab led by Skylar Tibbits – the Self-Assembly Lab Director and a trained Architect, Computer Scientist and Artist. Their research is a collaboration between MIT and Stratasys Education.

However, research into 4D printing is being carried out across the world in Australia, Singapore, India, and many other countries.

4D printing is similar to 3D printing yet quite distinct. The common ground between 3D and 4D printing lies in the fact that the printing can be carried out on any regular 3D printer. A separate 4D printer is not needed to 4D print an object. This is a common misconception among many new learners.

The major difference in both technologies lies in the use of materials. 4D printing makes use of smart materials also known as Shape Memory Polymers (SMPs). These smart materials can change shape and can later regain their original shape in response to external stimuli. SMPs can also be called pre-programmed materials that behave in a certain way on the application of the stimulus. The SMPs are made from two base polymer resins. The interaction between these resins and their thermomechanical properties helps the materials change shape.

4D printing can make use of FFF 3D printers or resin-based 3D printers like Polyjet. A smart material is used which can be either a Liquid Crystal Elastomer (LCE) Or A Shape Memory Polymer (SMP). The printing process is the same for 4D printing. Once the object is formed, the object is called a 4D printed object.

This object however is very different from a 3D printed one due to the smart material used. As explained earlier, this 4D printed object now can be manipulated to change its shape according to external stimuli.

For example, if we 4D print furniture then we will only have to print a flat piece of furniture, but upon exposing it to heat, light, magnetics, or any other energy form, it will convert into a chair.  This can have a profound impact on the entire logistics industry. The logistics will be so simple resulting in time, cost, and effort savings.

4D printing holds a lot of promise in the future as researchers envisage many practical applications of the 4D printed objects.

The medical industry will benefit the most from this technology. Experts believe that one of the applications will be in drug delivery. A 4D printed device will be implanted in the human body and depending upon the heat and energy reactions of the body, the device will release medicine to resolve the bodily issue.

Another major impact will be felt in the energy sector. It can be installed with a solar panel where the solar panel will automatically change its direction to follow the sun and capture the highest concentration of heat from the sun.

Childcare products like apparel that adapt to the fluctuations in the heat, moisture, etc., and adjust the clothes to the comfort of the wearer.

5D printing is a very new concept and is still majorly in the research and experimental phase. Very few companies are exploring this avenue. One such company is the Mitsubishi Electric Research Labs (MERL) which implemented 5D printing thanks to William Yerazunis, a Ph.D. Senior Principal Research Scientist of MERL. He developed a functional 5D printer in 2016-17.

As this printer can print in 5 angles, really complex and perfectly curved layers can be easily achieved which is a limitation in a 3D printer. This also eliminated the problem of anisotropic prints so the object created is far stronger than those created on a 3D printer.

Lastly, we can identify multiple differences in both these technologies as they are quite distinct. Distinct in the use of materials, in the use of the printing bed, and even in the applications that influence and impact they have.

3D Printing? How about 4D Printing or 5D Printing