Are 3D Pens Worth It? My Personal Opinion 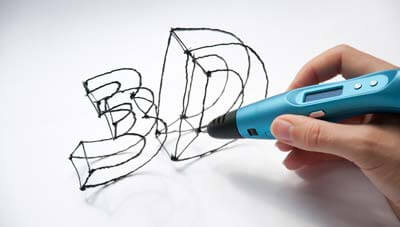 When people hear about the newest 3D pen on the market, a lot of them think it’s just another failed attempt of making a gimmick something worthwhile. To be honest, it’s not too fa fetched a thought that 3D pens are overpriced toys. However, I’m here to give you the truth on if they are indeed gimmicks or if they are actually worth the money.

3D pens are only worth it when you buy a high-quality, well-reviewed model from a good brand. They can be quite the experience for kids and adults if they work properly. They are limited, however, and they are not for everyone. It just depends on your wants and needs as a buyer.

To be honest, 3D pens are often hit or miss. As something that hasn’t been in the mainstream market for very long, there are many out there that do not perform well. I will provide more info down below and even a guide to help you find a 3D pen that is worth it!

Are 3D Pens Worth it?

Like I mentioned before, 3D pens are only worth it given that you’ve done your research on the product and brand. There are just as many, if not more, duds out there than products that are actually worth the money.

Another thing to consider is how big the target audience  is and if you are included in that audience. If you are an avid 3D printer user, you still aren’t guaranteed to fall in love with any 3D pen. While most 3D printer users use it to recreate objects or create brand new objects, 3D pen users tend to care less about what they are making and more about the artistic joy it brings to them.

What are 3D Pens Used For?

Like I mentioned above, 3D pens can be used to add accents to pre-existing 3D printed objects. It can also be used on something that was store bought rather than being made by you with a 3D printer. Let’s say you have a figurine collection of your favorite superheroes, and you want to add your own flair to them. Just get out your 3D pen, and you can have yourself some custom figurines in no time.

If you’ve ever wanted to see Batman with a pink bow tie or green belt, now is your chance to make that happen. Keep in mind that you can’t make precise strokes with a 3D pen like with 3D printers so more complex designs won’t be easy with a 3D pen.

Besides decorating your figurines, it can also be a distraction for your kid who will surely get a lot of playtime out of it. You may want to consider getting a child-safe 3D pen for that though as 3D pens marketed for adults may have exposed metal pieces that can easily burn a kid. If you’re interested in that, check out 3Doodler’s 3D pen marketed for children.

With every product on the market, there are pros and cons. There are some great things, some things that concern you, and then there are the things that can keep you from buying the product. These three things can be considered the good, the bad, and the ugly. Find more about them below.

The main thing that comes to mind when referring to the good things is just the fun times that you can have with a 3D pen. I know I would have a blast if I sat down one afternoon and created a few small objects with a 3D pen. Not to mention the larger things I could create with a lot of practice.

When I think of a 3D printer, I think of impressive and precise builds like bitesize cities that can sit on a table or detailed decorations that can bring an entire room together. Unfortunately, that just isn’t possible for a 3D pen. They aren’t made to create detailed objects like that.

Though most don’t see this as a big deal, it is important to mention the possibility of a 3D pen burning someone if they aren’t careful. A lot of 3D pens, much like a glue gun, can easily burn the skin of someone if they touch the point in which the filament comes out. Speaking of the filament, it is also hot beyond application which is also the same for the glue in glue guns.

The main ugly people might consider is the skepticism about buying a 3D pen. They are a newer addition to the market and really seem to speak to a different audience than the 3D printer crowd. Though a Kickstarter campaign was launched in 2013 for the 3Doodler, it was much later after that when 3D pens became more mainstream. Even then, it takes a long time for something to gain the popularity that something like a 3D printer has.

With 3D pens being a bit newer to the market, there’s just so many out there that are complete duds. The temptation to go buy one might be squashed by the endless one-star reviews by many. There are some out there that are worth a shot which we will discuss below.

It is important to do your research before buying anything, but it is particularly important with 3D pens as a lot of them don’t meet the standards created by the few successful 3D pens. The obvious way to do that research is searching Google to find articles like this one or search on YouTube to find videos like Teaching Tech’s video which you can watch by clicking HERE.

There are many 3D pens on the market that claim to be the best one out there. However, you can scroll to see if that’s the truth or if the reviews reveal a different story. Reviews aren’t always the best way to decide if the product is worth it, but if there’s a lot of one-star reviews saying the same thing, the chances of the product working it are very slim.

A 3D Pens Worth it? My Person Opinion: Now You Know

Since honesty is the best policy, it’s important for me to say that you never know what you’re gonna get when you’re buying things like 3D pens. They can be hit or miss, and there seems to be a lot of misses when referring to 3D pens. However, with extensive research, you can certainly find one that is worth your time and money.  The final point is consider your purpose and that might answer best if a 3D pen is right for you.

Are 3D Pens Worth It? My Personal Opinion