Can You 3D Print Anything? 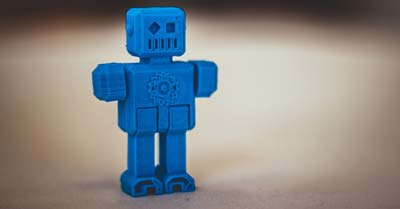 Can you print anything using a 3D printing?  The short answer is a qualified, YES.  People are often amazed by the range of objects and structures that can be printed using 3D printers.  The only practical limitations for printing are the build volumes, which essentially means the area the printer can print.  There are some incredible things that have been 3D printed, so read on.

First a quick primer on what exactly is a 3D printer. 3D printers work from 3D models, by converting them into cross-sectional 2D layers. These 2D layers sit one upon the other in order to build up the object. This is also known as additive manufacturing as material is added one layer at a time to create an object.

It involves extruding material, like thermoplastics, through a nozzle controlled by a computer.  As layers are added they are fused together.

3D printers are not bound by complexity, they are capable of printing any shape that can be digitally designed. It is the additive process of building up very fine layers which negates the issue of complexity. These layers are built one upon the other working from the bottom up. It is possible to print layers as thin as 0.05 mm. Using layers this thin, you can create incredibly complex objects.

So, if 3D printers are capable of producing such complex objects, how have people used this technology in practice? Here are some of the unbelievable objects that have been printed using a 3D printer.

There comes a time in every Mission Impossible film when hero Ethan Hunt peels off a hyper realistic face mask to reveal his true identity. Such masks are no longer the realm of science fiction thanks to 3D printing. 3D printed masks can be built up to capture the exact shape, contours and coloration of a person's face.

When we think of 3D objects we tend to think of things on a relatively small scale. But 3D printers are capable of producing much larger objects including cars. One of the first manufacturers of 3D cars, the Chinese company Polymaker, believes the technology will transform the entire auto industry. As with any other 3D object, the parts for their cars are built from bottom up, layer upon layer.

One of the most important benefits of 3D printing is customization. Traditional manufacturing processes work very well when you need to produce a whole lot of something. But what if you only need to produce a hundred or a dozen of an item? Or maybe even one very unique item? This is where 3D printing really shines. There are very few things quite as unique as our teeth. That is why 3D printing one of the first unbelievable, yet very practical, applications of 3D printing are dentures. As detailed in Dental Economics, 3D dentures are advantageous over traditional dentures they eliminate the need for a dental lab and reduce the amount of time between the initial appointment and delivery.

Talking of highly unique parts of the body, how about organs? Yes, it is possible to even produce human organs using a 3D printer. This process is called bio printing. Bio printing involves forming cellular structures using stem cell enriched bio inks. As with any other type of 3D printing, layer upon layer of this bio material is added. Building up organs, tissue or skin. Scientists at the Human Genome and Stem Cell Research Center in Sao Paulo, have successfully 3D printed livers. These livers are able to perform the standard functions of a liver including producing proteins and bile secretion.

Your next home might just come out of a 3D printer. Sounds unbelievable? The technology is closer than you think. When large scale concrete 3D printers were first introduced, they were very expensive. Now according to 3D printed builder ICON, it may be soon possible to deliver a house for as little as $4000 and within only 24 hours. Those economics could transform the house building industry.

Can I 3D print food?

As you have seen 3D printers are capable of printing everything ranging from organs to houses. It should not come as a surprise then that you can also 3D print food.

The first wave of 3D food printing would not have been featured on any foodies’ culinary highlights. These were produced using a sugar paste that wasn't all that appetizing. However, over time the technology has improved to where it is now possible to make a wide range of very appetizing foods including chocolate, pasta and even pizza.

A significant shift in the food printing industry came in 2014. This is when Barcelona based, Natural Machines introduced a 3D food printer that was able to use fresh ingredients to create both savory and sweet meals. This is possible without the use of either additives or gelling agents.

3D food printing isn't going to be the best option for all types of meals. But it does excel in certain aspects in the kitchen. One of these is precision. 3D food printers are capable of producing very fine layers which allow the chef to put together meals that would be extremely difficult by hand. Tied to this is the range of creativity that a 3D food printer allows. You can create a completely customized Pizza from your home, in under five minutes.

What are 3D printing limitations?

3D printing will be a transformational technology in the years ahead, but it is not without its limitations. 3D printing may never fully take the place of traditional manufacturing processes.

Energy consumption - The high energy costs associated with 3D printing is currently one of the most problematic aspects of the technology. Some research suggests that 3D printing uses as much as one hundred times the power as traditional manufacturing. Not only is it expensive, it is also a real concern for its environmental considerations. These costs are likely to fall over time as the technology scales and improves.

3D printing is slow – when compared to traditional manufacturing. Therefore, unlikely to be adopted for mass production, at least in the short term. This does vary depending on the size and detail of the object. The speed of production is also less important for home use and small production lines.

Legal risks - 3D printing allows anyone to print virtually anything. Such power can of course be used for ill, as well as for good. One of the early challenges produced by 3D printing were the ethical and legal ramifications of being able to 3D print firearms. 3D printing can also be used to pirate products.

Color and texture - 3D printers certainly are capable of producing multiple colors and texture items. However, with current technology, most would agree that the color and texture options offered by traditional manufacturing are superior to those offered by 3D printing.

To sum it all up.

3D printing is a transformational technology that will soon play a role in almost every part of the construction and manufacturing industry. The ability to print incredibly complex, customized objects will allow us to produce items that we only once dreamed of. The practical applications of 3D printing are already here and will only become more revolutionary in the future.

Can You 3D Print Anything?