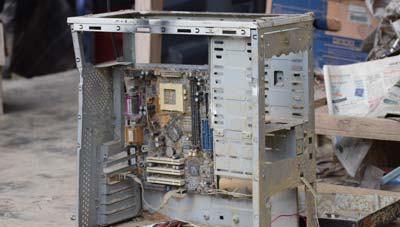 Workplace and personal-use 3D printers are becoming more commonplace and accessible to everyone. When purchasing a new 3D printer, having a thorough knowledge of each part can help you get the most bang for your buck. Awareness of such information can also enable you to maintain and repair your printer.

Understanding the technology you use is both interesting and useful. You may even want to build your own 3D printer as your next DIY project! Before you buy a new machine or start tinkering with parts, though, you will need to know all about the necessary bits and pieces that make up a 3D printing machine.

Controller Board or Motherboard

The controller board (also called the motherboard) is the real brains of the operation. Its job is to take inputs from a computer and direct the movements of the printer’s mechanical parts. Some boards are simple and merely suited to perform current functions. Other boards are complex and employ designs that allow for additional features and future expansion.

Just like a computer, the board contains the processor. The 8-bit or 32-bit chip typically has just enough processing power to compute basic movement for the motors, including direction and acceleration.

Without a reliable controller, a printer will not be able to function to its greatest potential even if all the other parts are high-quality. To learn more about controller boards, watch this 7-minute YouTube video.

To purchase a controller board, check out Amazon’s Best Sellers List for 3D Printer Controllers.

The raw material that objects are made from is called the filament. Filaments come in spools, like thread, and can be considered the equivalent to ink for an ordinary 2D printer.

To create a 3D object, the filament is fed into a heated chamber in the extruder assembly, where it is heated to its melting point. Next, the substance is pushed through a metal nozzle to create the object in layers, following the designated blueprint.

There are many types of filaments with different properties and ideal uses. Some filaments can conduct electricity, resist chemicals and heat, or glow in the dark. Most filaments consist of thermoplastics, though metal and even wood filaments also exist.

Printers use specific filaments, and you should be mindful of compatibility when purchasing materials. Most printers use filaments of the Polylactic acid (PLA) or Acrylonitrile butadiene styrene (ABS) varieties.

The following table compares the two most common filaments:

Examples of other types of filaments include:

You can find a variety of filaments on Amazon, including their choices for a PLA filament and an ABS filament.

The frame for a 3D printer is similar in function to a case for a computer. Effectively, they both organize and hold all the mechanical and electrical components together. Frames are typically closed or open, though semi-enclosed frames—which have closed sides with an open front or top—also exist.

Closed frames have some advantages. They protect internal components from dust and other undesirable particles and help to maintain the temperature of the printing space, leading to better and more consistent results.

There are several types of frame constructions to choose from:

Though the purpose of a frame is simple, it can be one of the parts that varies the most in terms of design. When purchasing a frame, you should consider the following factors:

On Amazon, frames can range anywhere from $100 to hundreds of dollars.

As logic dictates, a 3D printer must be built to move in three directions:

Upon receiving instructions from the controller board, the motion components are responsible for moving the print bed and print head in all directions. This essential part includes four essential pieces:

The end stops are markers along the three axes that identify the range and location of each mechanical component. End stop scan be either mechanical or optical.

Contained in a compact box with screw wires and a fan, the PSU is responsible for supplying the entire printer unit with power. Typically, the PSU unit is mounted on the frame to conserve space, but it can also be contained within a separate controller box that also features the user interface (3D Insider).

Inside the PSU are the following:

When looking at PSUs, it is essential to understand the terminology associated with voltage or current strength, as indicated.

The output voltage is essential for checking compatibility with your hot end. The output current dictates how many hot ends you can have and, thus, how hot the heat bed can get.

Follow these two steps for purchasing an adequate PSU:

Most crucially, the strength of the PSU determines the maximum temperature that the printer is capable of working at. Thus, working with advanced filaments requires a more powerful PSU that allows for higher temperatures. Cheap printers tend to come with under powered PSUs that are only adequate for the most basic materials (PLA only).

The print bed is where the magic happens. In other words, it is where the extruder deposits filaments, one layer at a time, to create a 3D model.

There are two primary functions of the print bed. The first is to provide a flat surface for the bottom layer of the print. The second is to act as an adhesive surface for extruded plastic to temporarily bond with, holding the print in place as each layer is applied.

Print beds can be heated or non-heated. If you plan on working with advanced filaments, you should strongly consider a heated bed as it will help the first layer adhere, and, thus, increase stability. Such a practice will help discourage warping and improve the quality of your print.

Print beds are made from a variety of materials, with differing surfaces, thermal characteristics, and costs. The most common are aluminum and glass. Glass beds are denser, flatter, and have lower thermal conductivity, meaning they spread heat more evenly and take longer to heat up.

Other types of print bed surfaces include:

Print beds typically require you to apply a layer of adhesive to them, such as painter’s tape, 3D gloop, or glue.

You can find plenty of reasonably priced print beds on Amazon.

The business of handling the raw material is left up to the print head (or extruder), which is separated into cold and hot ends. As the names suggest, the cold end deals with the solid-state filament while the hot end works with the melted substance.

As it grabs material from the filament spool, the cold end grips the filament and feeds it gradually toward the hot end. Following, the hot end, which maintains a higher temperature than the filament’s melting point, melts and deposits the filament through a nozzle and onto the print bed.

The print head is made up of several essential components:

Extruder nozzles come in different sizes, though 0.4 mm is the most common. Nozzles with smaller diameters are best at achieving high accuracy for finer details. Larger nozzles are ideal for working at fast speeds. The nozzle can be changed or swapped depending on what kind of project you are looking to complete.

3D printers come with a single or dual-extruder set-up. Utilizing a dual-extruder system, you can use two filaments simultaneously, which allows for additional creativity and complexity.

There are two types of feeder systems that a print head might have. With the direct feeder system, the cold and hot ends are directly connected. In the Bowden feeder system, there are separate locations on the frame for the hot and cold ends, which are instead linked by a filament tube.

Most 3D printers have mounted interfaces that allow you to control settings without needing a computer. The user interface is used for the following functions:

Most user interfaces consist of a basic LCD screen and a knob, dial, or set of buttons to operate functions. Some even have full-color touchscreen interfaces, however.

Modern 3D printers come with a variety of connectivity and file transfer options. Older machines relied on cabled connections via ethernet or USB ports. Such methods still exist but are less popular due to their inconvenience.

With cabled connections, the printer must be connected to a computer that must also remain on during the entire printing process. Sometimes prints can take up to a day to complete. Furthermore, issues that plague the connected computer, such as a forced shutdown, can affect the print process.

Though they might look complicated on the outside, 3D printers are relatively simple to understand. Now that you know all about how the inner components work, you can comfortably repair and maintain your own machine.

If you are in the process of purchasing parts, keep all your options in mind, and especially take care to remember some of the critical bits of information. For instance, the controller board is of the utmost importance, and if you were to splurge on a part, that would be the first one to consider.

As you typically should, when technology is involved, always keep the compatibility of different components in mind while you customize and put together a 3D printer.