How Much Can You Print with 1Kg of Filament? 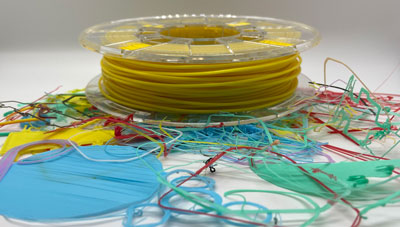 3D printing is becoming more and more a mainstream hobby.  The cost of 3D printers has dropped to the point that almost anyone can afford to get into the game.  Many new 3D printer enthusiasts wonder how much they can print with 1KG of filament.

Since 3D printing with filament is a direct transfer system, you can expect to print almost 1 Kg of pieces with a 1 Kg spool of filament.  There is a small percentage of loss between printed pieces and loading the filament.

The number of pieces you can print with a 1 Kg spool of filament depends on the pieces’ size and complexity. There are several ways to calculate the amount of filament needed to 3D print an object.  We’ll discuss which of these methods are more accurate than others, and which use the software that controls your printer.

Perhaps the easiest and most straightforward method of calculating how many pieces you can expect to print from a 1Kg spool of filament is the direct method.  The direct method doesn’t require much math.

The direct method requires that you print one example of your project piece and then weigh the example.  You can easily calculate the number of pieces you should expect to get from a 1Kg spool of filament based on the finished piece’s weight.

Let the Software do the Work.

Knowing how much filament you need, either by weight or length, allows you to estimate if you have enough filament on a used spool to complete the project.  There are ways to connect spools of filament for projects that require more than one spool.

Estimate the Volume and Do the Math

If you create solid projects, you may estimate the piece’s volume and use that estimation to calculate the volume of filament.  More math can give you the length of the filament, based on its diameter, used to make the model.

This method doesn’t work well with 3D projects with many openings or voids or irregular in shape and size.  Estimating the volume of the solid parts of such a model is almost impossible for most people.

What is “Slicer” Software

Most 3D objects intended for 3D printing are designed using specialized CAD (Computer Assisted Design) software that allows realistic 3D modeling.  However, once the model design is complete, it is still not ready for your 3D printer.

A specialized software application called a slicer takes the 3D rending and breaks it into a series of slices of the model.   These slices tell the 3D printer where to put material and where not to put material.  The slicer file is what controls the printing.

Slicer software delivers a lot of information to the 3D printer during the printing process.  The slicer file tells the 3D printer

Are There Ways to Use Less Filament?

There are many ways you can make your 3D printing more filament efficient.

Do You Need a Solid Model?

Consider our cube from the previous example.  If we can do without a solid model, we might produce a hollow model.  If we make each of the model 1 mm thick walls, we can remove a block of material from the model that is 6 mm on each side.

The block of material saved by making the model hollow is 216 mm3.  We have now reduced the total volume of filament needed to produce this model to 296 mm3.  When compared to the original 10 mm cube, this represents a savings of almost 70%.

Save that Waste Material – Become a Recycler

Some heavy users of their 3D printer, especially those that print complicated models with lots of support structures, invest in small filament extrusion machines.  The waste filament is recyclable.

You can purchase small home-sized filament recycling machines or download the instructions and files to print and build a filament recycler.   Heavy users of filament can generate considerable savings over time.

Choosing the Type of 3D Printer can Save Filament

3D printers come in several styles and types.  The three most popular are

Filament spools for FDM filament printers are considerably cheaper than wither SLA resins or SLS powders.  The difference can make your models significantly cheaper to produce.

FMD printers also reduce filament usage on solid models by creating internal infill areas that use only 25 percent material rather than a solid infill like SLA or SLS printers.

For most home and hobby 3D print enthusiasts, an FDM filament printer is a much better choice and more economical to operate in the long run.

The Simple Answer vs. the Real World Answer

The obvious answer to the question, how much can you print with 1Kg for filament, is you can print 1Kg of models.  What most people want to know is how many models will a 1Kg spool for filament create.  That is a more complex answer and depends on several factors

We hope that this article has given you some insight into how much you can print with 1Kg of filament.  On the surface, the answer seems simple.  However, the complexities of 3D modeling and printing make the underlying answer more complicated.

How Much Can You Print with 1Kg of Filament?