How To Clean a 3D Printer Nozzle 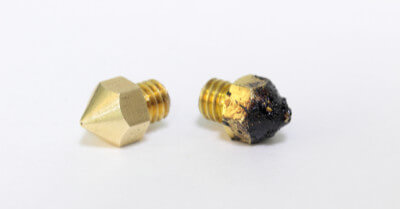 Clogged or dirty 3D printing nozzles can ruin your printed models. To make sure your machine performs well, you should know how to clean a 3D printer nozzle.

Before you clean your 3D printer nozzle, you need to first identify the clog and clean it out. Then, to properly clean a 3D printer nozzle, there are a variety of methods you can use. There's the cold pull method, the needle method, and full replacement if the nozzle is too far gone.

3D printing is completely revolutionizing the construction industry, and even NASA uses them to design certain parts that fit in their rockets, satellites, and rovers. To keep things simple (and functioning smoothly), we are only going to focus on cleaning the nozzle of 3D printers used by enthusiasts or business owners.

Since 3D printers are a relatively new technology, we had to consult with experts and scour the internet to find all the information that's fit for print on how to clean a 3D printer nozzle. So, without further ado, let's dive into it.

‍Why Does a 3D Printer Nozzle Get Clogged in the First Place?

When it comes to 3D printers, several components contribute to the development of an object, but the nozzle is arguably the most important part. This is when melted material exits the hot end and is called the exit point. If you're unfamiliar with this part, it typically has a thread to connect to the hot end and a smaller hole on the other end to feed the filament through.

The nozzle is crucial since it regulates a printer's extrusion, and if not operating properly, may cause a host of printing problems. Furthermore, if you look closely at several different types of 3D printers, you will find that not every nozzle is the same. The material, diameter, and other characteristics determine its performance and lifetime. Besides, nothing, including nozzles, lasts forever.

In other words, even the nozzle of 3D printers degrades with time, especially if they get dirty, clogged, or are overused. That's why it's critical to clean your printer's nozzle on a regular basis and ensure that it, along with the other hot end components on the printhead assembly, are all in excellent operating condition.

Of course, if you are having trouble with your 3D printer, then the nozzle will not always be the main culprit. This is why you need to be familiar with the various components and tasks in a 3D printer that may be the problem before you clean the nozzle. That being said, it is best to make sure that the nozzle of your 3D printer is always kept clean just to be safe. The following are a few hiccups that are faced by 3D printer owners:

A hot-end jam is oftentimes mistaken for the filament of the 3D printer getting either trapped or stuck somewhere in the middle or the lower part of the hot end. The nozzle could be the main culprit here since it sits at the end of the hot end; however, you should also make sure to inspect the path of the hot end, as in the PTFE liner as well.

An inconsistent extrusion may appear as if the machine is lagging behind the extrusion of material. The result – it starts to extrude material in small bursts rather than printing smoothly and spreading and spreading an even amount of filament. The issue here could be the stepper motor of the extruder or wet filament, so it's best to check out both.

While the two issues mentioned above may not be the nozzle's fault, this one is. When the print starts and is completed with just a few printed layers, then it is often an issue with the nozzle, aka, a clogged nozzle. That being said, double-check the diameter of the filament as well as the print temperature and whether or not the extruder is rotating properly.

A clogged nozzle can also lead to no filament coming out of the hot end when you begin to print. That being said, you should also check on the Z offset setting and double-check to make sure the bed is level.

It is not unheard of for the 3D printer's nozzle to pick up some of the material as it is moving across a layer. While this could be a faulty Z offset or level bed, it is mostly the nozzle that is the issue.

The most evident of all nozzle issues is debris on the nozzle's outside. Excess melted material that is adhered to the nozzle during printing is generally what you're going to find.

While the nozzle is still hot, clean it with a moist cloth or an alcohol wipe. This may produce steam, but it will effectively remove any material stuck to the nozzle. If this doesn't work, remove any leftover debris from the nozzle using a wire brush, tiny blade, or needle.

While this cleans the nozzle's exterior, it's preferable to avoid having any material on it in the first place. It's also a good idea to use a silicone sock that covers the majority of the nozzle to keep too much material from adhering to it.

If there is a gap, melted filament will fill it. The substance will plug the heated end as it cools, and both PTFE-lined and all-metal hot ends are susceptible to this. To fix this problem, remove the PTFE tube from the hot end (if feasible), then nearly completely screw the nozzle in (about 95 percent in). Insert the tube down the hot end after ensuring that the PTFE end is flat and the PTFE coupler (which holds the tube) is snugly fitted into the hot end. To ensure a tight seal between the nozzle and the PTFE tube, screw the nozzle the final bit into the hot end.

Clogs in the nozzle occur when debris at the hot end stops the nozzle's output hole, preventing the filament from escaping (which results in under-extrusion, or worse, missing prints).

Partially clogged nozzles and fully clogged nozzles are the two forms of nozzle blockages. Full clogs, as you might expect, are the worst kind. Debris completely clogs the output hole, trapping filament within the extruder. On the other hand, a partial blockage is when material blocks part of the exit hole. If you have either, the nozzle needs to be cleaned immediately. There are various ways to clear nozzle blockages, and we'll go through three of them here.

The first and most straightforward way to clean a 3D printer nozzle is to break up and push the debris out of the way with a little needle inserted. This might take some time, but you'll be able to be more precise with your movements.

You can also use the cold pull, which completely removes the debris from the hot end and is one of the more common methods that are used to clean the nozzle of a 3D printer. To do this, fill the nozzle with filament and let it heat up. Once that's down, press the "cool down" button and start manually pushing on the filament until it exits the nozzle. Then, heat up the nozzle again to about 85 degrees Celsius. Once you hit this temperature, use pliers to grab the filament and pull it out. Make sure to pull in a straight line.

The final option is to replace your blocked nozzle entirely. Because generic brass nozzles are so inexpensive, this procedure is painless in terms of cost. Start by heating the hot end to melt any hardened material caught in the nozzle for this approach. Also, remove any filament that has been put into the extruder.

Unscrew the nozzle from the hot end after the blocked filament has softened due to the heat. Clean the hot end with a tiny metal rod or pick to remove any extra filament caught in the assembly before installing the new nozzle.

How To Clean a 3D Printer Nozzle