Is Glow in the Dark PLA Abrasive? Here’s the Truth! 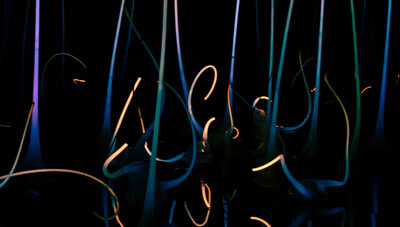 Glow in the dark PLA is more abrasive to a printer than standard PLA. This product commonly contains strontium aluminate, which is a phosphorescent material that produces the glow in the dark effect.

Do not let the fear of ruining your nozzle stop you from having a great time with this amazing filament. Throughout this article, you will learn how to prevent damage while using glow in the dark PLA and much more.

Is Glow in the Dark PLA Abrasive?

The truth about glow in the dark PLA is that, yes, it is abrasive. The strontium aluminate is a pale, yellow, crystalline powder that will eat away at the brass nozzle on your 3D printer quite easily.

This material also glows up to 10 times brighter and glows for a longer period of time than other material such as zinc sulfide; therefore, if you’re using glow in the dark filament, then it will most likely contain strontium aluminate.

There is really no way around the abrasive factor if you want to create glow in the dark objects with your 3D printer. The best thing to do is search for a nozzle that is better suited to handle the job!

Since you really want to use glow in the dark PLA in your 3D printer, it is recommended to buy a better nozzle than the brass nozzle that your printer was made with.

Most 3D printers are manufactured with brass nozzles because the are very affordable and have excellent thermal properties. Unfortunately, brass is not strongest metal alloy, and it can be easily damaged when you use a rougher material, such as glow in the dark PLA.

Luckily, there are other options you can look into when searching for a more durable nozzle for glow in the dark filament.

Buying a new nozzle for your glow in the dark creations is easy and well worth it. It really is a win-win since the brass nozzle your printer came with will have to be replaced after using your printer a few times, anyways.

What Is the Use for Glow in the Dark PLA?

Glow in the dark PLA is no doubt a super cool filament to be experimenting with. 3D printers are commonly used for creating prototypes of much bigger objects, and you would use a standard filament in a case such as this.

You would not really have a reason to use glow in the dark PLA for prototypes.

Glow in the dark filaments are typically used for:

These types of filaments are really just used for your enjoyment, and, because who doesn’t love things that glow in the dark? It’s mostly used for fun.

PLA stands for polylactic acid which is a plant based plastic material made from cornstarch or soybeans. Standard PLA is not very abrasive, so a single nozzle can extrude a lot of it before needing replaced.

Standard PLA does not contain the crystalline powder that glow in the dark PLA has, and therefore is not nearly as abrasive.

If you are planning to use a regular PLA filament, the brass nozzle that came with your 3D printer will suffice.

Is Glow in the Dark PLA Safe to Handle?

When you first see that awesome glow that makes your filament looks as if it just fell from outer space, you may be wondering if you are putting yourself in danger. Is it radioactive or otherwise dangerous?

Despite its “radioactive” glow, glow in the dark PLA is completely safe to handle. The light that is given off by your filament is caused from the phosphorescent material absorbing light and releasing it as a softer light.

So, there is no need to worry about putting yourself in harm’s way by using the glow in the dark PLA.

How Long Does It Glow in the Dark?

Have you ever had a toy or piece of plastic jewelry that glowed in the dark? It would glow for a while, then you would have to take it out into the sunlight or hold it up to a light to “recharge” it.

That is exactly how glow in the dark PLA works.

The longer you leave your object under light source to absorb its energy, the longer your object will glow. It does not matter if the light comes from the sun or a lamp in your house.

The glow will usually fade out after a few hours, so this would not be ideal for something that you want to glow permanently.

Are There Other Types of Glow in the Dark Filament?

If you are wondering, PLA is not the only filament out there that has glow in the dark options. PLA is just the most environmentally friendly because it is plant based.

Other types of glow in the dark filament are:

Glow in the Dark PLA: A Fun Toy!

There are many options to choose from when deciding which glow in the dark filament to use, even if you don’t want to use PLA.  Whatever you use, just remember to replace your brass nozzle with a something a little more durable and create amazing things that will light up your desk. Happy printing!

Is Glow in the Dark PLA Abrasive? Here’s the Truth!