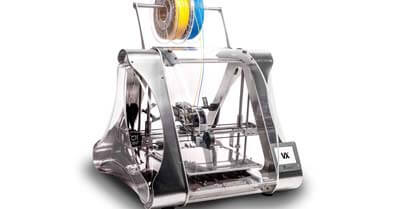 A 3D printer is a tool that can be used to create a three-dimensional model of any object. All printers follow roughly the same process; using spools of filament and a digital file for a blueprint to create objects. But each brand of printer is unique in the features it offers.

What should you look for in a good 3D printer? You should look for a printer that will best accommodate you in your daily life. It should be able to fit in the space you have, have good print speed and quality, and be able to fit your budget. ‍

Owning a 3D printer is a dream for many artists, entrepreneurs, and manufacturers. Unfortunately, they can be incredibly expensive and possibly not be worth what you paid. To help you avoid some of this confusion, the following is a review of 8 of the best 3D printers under$1000 that are on the market.

The Printers Being Reviewed

Each printer was selected based on their prices, how many features they have to offer, and customer reviews.

What is the best 3D printer?

The best 3D printer is the QIDI TECH X-Plus. This printer comes with the most additional features, it’s the most highly reviewed out of all the printers, and the positives of this printer outweigh the negatives.

The most glaring issue is that this printer is the most expensive one on this list. Regardless, it’s still under $1,000 dollars, which is a great deal when it comes to 3D printers. The average one can cost between $1200-$1500 dollars. You also get your money’s worth with all of the extra features and additions that come already added on to it. It’s a worthwhile investment for someone who does 3D printing as part of their living, or for someone who has 3D printing as a passionate hobby.

The QIDI TECH X-Plus doesn’t have the number one spot for nothing. It is the highest reviewed printer on this list, with a solid 4.9 out 5 stars review, and for good reason.

Some of the materials that can be used with this printer include:

To be able to connect to multiple devices, this printer comes equipped with:

And while most printers only come with a single extruder and one filament compartment, this printer contains:

This printer sure does seem to have it all, but it doesn’t come without a price. It’s the most expensive printer on this list, but it’s worth it for how much use you’ll get out of it.

The other brands of printers that made the honorable mention list are:

In addition to 3D printing, the Bibo Dual Extruder 3D Printer also has the ability to laser engrave onto materials such as:

With this printer, you’re getting a 2 for 1 deal with a 3D printer and laser engraver. It also comes with extra benefits like:

And customers seem to have almost no complaints about any of these features, with a solid five-star review from most customers and a 4 out of 5 total average. It is one of the more expensive ones on this list, but you also get a lot of uses out of one 3D printer. The only downside may be that the laser is a decent grade of quality, rather than top notch. But the positives seem to outweigh the negatives with this printer.

The Creality CR-10 Plus is probably the easiest out of these printers to build. Its frame is rather small and simple, with a triangular shape for added stability and to prevent printing errors caused by vibrations. Even though it has a more barren design, that doesn’t mean it’s printing quality isn’t good.

One thing that makes this printer stand out is how compatible it is with many other materials. Most printers are not compatible with a Linx OS, but this one is. It also supports materials such as:

Customers are also generally impressed with the printer quality, despite how simple it is, with an average review of 4.4 out of 5 stars. It’s also a lot less expensive than other printers we’ve reviewed so far, so it’s a great printer for beginners to use.

First designed in 2014, the Flashforge Creator Pro is one of the most popular choices among 3D printer users. Its design consists of a solid metal frame that is a lot more sustainable than a traditional wooden frame, but is still fairly compact at less than ten inches long and eight inches wide.

As for what this product can do, there’s one thing that sets it apart from many of the other printers on this list. This printer has a dual extruder, which allows you to print with multiple filaments. This is useful if you want to make more detailed and compelling designs, while still saving you some extra time and effort.

The customer reviews on this product are also excellent. With an average of 4.3 out of five stars on Amazon, customers are raving about how easy it is to use, the consistent quality of the prints with the dual extruder, and that it was definitely worth the somewhat hefty price tag.

The only issues that were mentioned with this printer were that the brim/skirt tends to go a bit fast, so sometimes the filaments don’t stick properly. But customers said that it’s an easy fix and the printer will work well for the rest of the time.

As the name suggests, the Snapmaker 3-in-1 3D Printer has three different modules to choose from depending on what the user needs at the moment. The uses of this printer include:

The modules are interchangeable and can be switched easily by simply choosing which one to use and inserting it into the printer. It’s made entirely from metal, so you know this printer can handle anything you throw at it; literally or figuratively.

Customers gave this printer a 4.1 out of five stars, saying that the quality of the model and of the prints is very high and it’s very easy to learn to use. The one common drawback was dealing with customer support. Most negative reviews had a lack of customer service as the main reason for complaint, but there are plenty of tutorials and videos online to help you out.

The cheaper option to the other QIDI product previously mentioned, the QIDI Tech X-Pro still has a lot of value and benefits despite the lower cost.

This printer can be used for tasks pertaining to:

It also still has dual extrusion and different ways to make post-printing processes easier, including:

It also has exceptional print quality, so you are still getting a good printer that won’t drain your bank account.

The smallest of the printers reviewed so far, the Original Prusa i3 MK2S packs a punch despite its space-saving design.

At only a few inches tall with most pieces measuring only a few millimeters, this printer is ideal for people that want to save space. It’s small size and equally small price make it a tough competitor for the larger and more expensive printers on this list.

Even though it’s compact, this printer comes with many features that you wouldn’t be able to find on bigger or more expensive printers. These features include:

With this printer, you won’t have to choose between compactness or quality, you get both for a lower price than printers that only provide one or the other.

Another option for a smaller 3D printer is the Tiertime UP Mini 2 ES. The main difference between this printer and all of the other printers is that it has an HEPA filter.

It’s a type of air filter that’s designed to catch harmful particles that can cause health issues, such as:

But, when used with this particular 3D printer, a HEPA filter is meant to catch the fumes and particles produced by a material known as ABS, or Acrylonitrile Butadiene Styrene. When this material is melted, it produces fumes and particles that can be harmful to the user.

With the HEPA filter, the majority of these fumes don’t reach the outside of the printer. This makes the Tiertime printer a healthier one to work with, and customers seem to appreciate that with a 4.1 out of 5 stars review.

The main issue customers seemed to have was that it was hard to assemble. It doesn’t come already built like most printers, so you’ll have to dedicate some time to building it yourself.

It also comes already assembled, so you don’t have to worry about setting it up incorrectly. Even though it doesn’t involve some DIY skills, it does require a little effort from you to get it started. But it does come with an easy to understand manual that you only have to read once, and then you can start printing.

Even though it has a 4.4 out of 5 stars overall review, this printer might not work for everyone. It only supports PLA materials and products and isn’t meant to be used with anything other than that. It’s a great printer for kids and people starting to learn about 3D printing, as it still provides the same time of experience, but in a safer manner.

What are some accessories that go with 3D printers?

If you find yourself wanting some extra benefits added to your printer, there’s a few extra accessories that you can purchase to up your printing game.

Containers can be pretty expensive, usually costing about $50 dollars and going all the way up to $90 dollars. A good filament storage box should protect your filaments from:

In addition to its multiple uses, it usually only costs between $20 and $25 dollars, a fair price considering how often it can be used.

They’re also angled in a way that you can hold them parallel to the printing bed. This will prevent the tools from scratching your printer at all.  It’s a more expensive alternative to masking tape, but it’s worth it if you use your printer frequently.

You can use solutions ranging from acetone to a high grade finishing coat, depending on the quality of the finish you’re looking for.

Finding the right 3D printer for you is a challenge, but it’s worth it to do the research and examine there views before investing in something that might not be worth it.