What Is An Extruder On A 3D Printer? 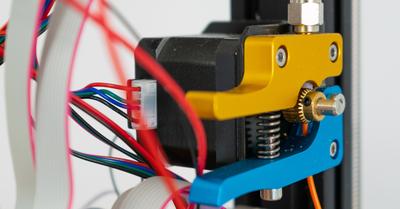 A 3D printer's inner workings can seem like a mystery. Let's introduce to you one of the most important parts: the extruder for a 3D printer.

3D printers seem like complicated machines – and in many ways, they are. The extruder is fairly easy to understand once you break it down into a couple of simple methods it uses.

The extruder is the part of the 3D printer that takes liquid or powder and turns it into the plastic that becomes the material of a 3D printer's finished product. An extruder has both a “hot” end and a “cold” end to make it possible to bring in unfinished liquid or bonding and turn it into something.

We'll walk you through the average 3D printer extruder and how it works. When you are done, you'll know a lot more about one of the most important parts of your 3D printer.

We are sharing research regarding the extruder and 3D printer. We've done 3D printing and consider it a hobby of our own.

‍What does the extruder do?

The extruder is where the idea behind your 3D printed item, and its actual creation takes place. The equipment itself is relatively simple: there is a cold end to the extruder, which takes in the filament (meltable microplastics). The “cold end” isn't actually cold at all – it is room temperature, but it is where the microplastics are taken for temporary storage while they wait to be melted.

What's in the cold end?

The cold end of the extruder most often has a stepper motor which has a small gear capable of fine movement and high torque, which is essential for pushing a “just right” amount of microplastics down into the tubing. A toothed gear within the extruder will be capable off actually grabbing and moving the microplastics.

Given the use of torque within the top half of the extruder, the best way to explain the “cold end” is that this end is like the top end of the print head for a regular printer: It receives from a plastic filament “cartridge” and serves to regulate just how much plastic is headed into the head end by using gears and a tube to limit or increase the amount sent.

What's in the hot end?

The bottom half of the extruder is where the action happens. The extruder has a motor that helps heat the microplastics up to their melting point.

The actual heat for the “hot end” comes from a heater cartridge. The electrically powered cartridge, often known as the heater block, has a motor that builds up and maintains heat and has a thermistor – like a thermometer, to report and adjust the temperature as needed within the heater block.

Also within the hot end is a heatsink and dedicated fan that maintain temperatures and cool the “hot end” down – all while keeping the incoming solid plastic in the right place so it doesn't melt too early or too late.

Once melted, the extruder has a nozzle opening, which is often just .4 millimeters wide, ready to slowly but steadily squeeze the melted plastic onto the tray.

Nozzles can be made from a variety of metals and plastics. Brass is the most common in retail 3D printers because they are relatively cheap, and soft, and they conduct heat well for the purpose of maintaining the right temperature within the filament.

Stainless steel and hardened metals are more commonly used when carbon, metals, or glass are included within the filament.

You can also get a variety of nozzle sizes to either go bigger with less detail or get a smaller hole that offers more precise detail.

A direct extruder places the extruder motor directly over the hot end, making for a very short distance of travel for the filament.

These types of extruders can separate the cold end from the hot end. The best part of a Bowden extruder is that the print head moves easier because the cold end is mounted elsewhere. It's widely regarded that with a Bowden head, you should be able to get more precise movements out of the extruder – and if you can't, you might want to fix your Bowden extruder head.

Can extruders get messy if not maintained?

Yes, they sure can. The extruder's job is to melt down a string of plastic known as a filament, and without precisely melting the plastic at the right time, it can get clogged. While the extruder doesn't exactly have a large number of parts compared to other electronics, parts like the heater cartridge and heat sink need to work well with the thermister to ensure that heat is in the right place, at the right time, at the right temperature to avoid melting the filament too early and causing a clog.

Otherwise, a well-maintained extruder should be capable of melting and extruding the filament as programmed.

Are extruders mostly the same?

For the most part, yes. The biggest differences will be the torque used to move different kinds of filament, the precision with which the “hot end” heats, and the size and type of nozzle. They are mechanically similar, though, with mostly the same parts. Think of this like a car engine, whether it's electric or battery: they are either powered by the transference of electrical or combustion energy, it's just a matter of how that energy is transferred and how fast.

Can I get different nozzles and extruders for a printer?

Yes, you can. It's more common to replace the nozzle itself – and easier unless you plan to do entirely different quantities and speeds of 3D printing.

What Is An Extruder On A 3D Printer?