3D Printed Food: What You Need to Know 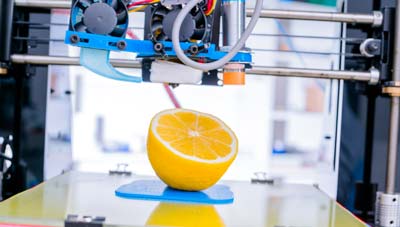 To expand upon this generic definition, an automated additive process is a process that, like 3D printing, takes a conceptual image or model and any existing material and combines the two to form an object without manual interference.

Now, this process is relatively simple for 3D object manufacturing. Typically, a single material, a polymer filament, will be used to form the object. However, 3D printed food fundamentally requires more than one material as most meals are comprised of multiple ingredients.

Thus, there are limitations to the types of food that can be 3D printed. These foods are generally paste-like or viscous. These include forms such as purées, mousses, doughs, mashes, cheeses, frostings, and occasionally even raw meats. The foods you can 3D print also depend on the type of 3D printing that you are using.

For instance, here are the types of printing ingredients that can be used with extrusion-based printing.

Here are the types of printing ingredients that can be used with selective laser sintering and binder jetting printing.

Finally, here are the types of printing ingredients that can be used with inkjet printing.

While this may seem like a relatively bounded list of ingredients, they can combine to produce a much vaster assortment of foods. Still, there is much more work to be done before 3D printed food becomes as integral to our society as 3D manufacturing is already becoming.

Before we look ahead, let’s look toward the past and delve into the history behind 3D printed food.

2006 was a major year for 3D printed food. Its foundation began as a NASA research project to more effectively and efficiently feed astronauts during their missions. That same year, a group of students at Cornell University led a project called Fab@Home, which used a multi-material 3D printer to print chocolate, cookie dough, and cheese.

Companies and groups such as Evil Mad Scientist Laboratories, Choc Edge, biozoon GmbH, and Modern Meadow continued experimenting with the technology, developing a range of projects. These projects include sugar sculptures, 3D printed meat, and even easy to chew food for seniors.

In 2013, Nasa developed its NASA Advanced Food Program, which sought more effective options for feeding a team of astronauts traveling on longer missions. The program collaborated with BeeHex to develop the Chef3D, capable of printing entire pizzas, although these pizza creations would have to be baked separately.

The following year, in 2014, 3D Systems and Hershey’s collaborated to develop a chocolate printer. These collaborations further legitimized the prospect of 3D printed food and gave it the platform for further expansion.

3D Printed Food: Why is it a Big Deal?

Now, with a glimpse into the past of 3D printed food, let’s take a look at its present and future – and why many believe 3D printed food could play a much more significant role in the years to come. To fully understand 3D printed food’s bright future, it would be prudent to understand where the future of the 3D printing industry as a whole is heading.

The 3D printing industry at large is booming. By 2024, 3D printing products and services are predicted to become an over 40 million US dollar industry. The expected growth rate of this industry between 2020 and 2040 is roughly 26.4% each year.

So, it is clear that the 3D printing industry is experiencing great success, but you may be wondering what this means for 3D printed food. Like most other forms of 3D printing, 3D food printing has the potential to create an increase in accessibility, efficiency, and quality for its respective industry.

Thus, there is a massive incentive to improving the technology behind 3D printing food. Still, there are drawbacks to using this technology. Let’s take a comprehensive look at all of the pros and cons of using 3D printing technology to create 3D printed foods.

First, let’s take a look at the pros associated with 3D printed food.

Now, let’s take a look at the cons associated with 3D printed food.

3D Printed Food: What You Need to Know