What is the Process for 3D Printing? 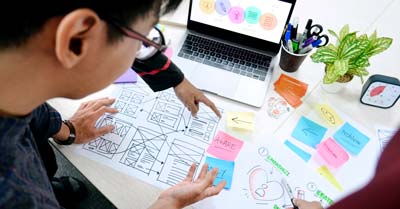 The 3D printing process is simple.  It is comprised of 4 steps:  create a 3D model, save as a stl file, open the file in a slicer software to create the g-code, send the file to print.  This article will cover the basics of each of these steps.

3D printing is the process of translating a 3D object into a digital model, digitally slicing it into thin layers recognizable by a 3D printer, and then printing it layer by layer using a 3D printer.  Rather than ink, a material, called a filament, is heated and extruded to produce thin layers added upon one another.  Filament comes in various types thus allowing printing with plastic, metal, cement, even chocolate.

3D printing is a technology has evolved rapidly over the past 3 decades and is likely to change the world.

The buzz surrounding 3D printing ultimately comes because of the quality of the end-product.

This is beginning to revolutionize the world as parts and prototypes are now being created almost instantaneously rather than the time consuming and cost restrictive nature involved in traditional mold making.

It's safe to say that 3D printing will change the future of humanity given the fact we are able to 3D print anything and the fact it can even be done in the comfort of your own home.

The process is simple once you understand the two steps:  preparing a model and the 3D printing itself.

How to prepare a model for 3D printing.

For most people, using a printer is second nature.  Create a spreadsheet, a document or picture, hit print, and the image is automatically sent to the printer to print in 2D.  3D printing is just a little more involved, but with a little learning and practice it too can become second nature.

The first step is to create a 3D model that can be saved and formatted in such a way that your 3D printer will recognize it.  A 3D model can be created using your computer and any CAD software.  CAD stands for computer-aided design, and is a generic name for modeling software.  Learn about specific CAD software in our other articles.

For those who may not want to become a 3D designer, you can utilize scanner software which has been created to utilize your cell phone camera to scan an object and translate it into a 3D model.

Once you have your model, the next step is to save the 3D model as and STL (stereolithography) file type. STL is a specialized format which prepares the file to be run through slicing software.

Slicer software chops up and slices your model into a series of thin layers and converts it into a g-code, which is a digital language the 3D printer can actually recognize.  The g-code is not fixed, you can modify numerous things such as the color, layout, temperature, and how fast you want your printer to print the object. Once your satisfied with the g-code settings you are ready to send it to the printer for printing.

How a 3D printer works.

Creating a model may be the most complicated step in 3D printing, but it doesn’t have to be, as you could literally purchase all your 3D models online from the many companies that sell premade models.

The actual printing should be the easiest step.

Most printers found in households are FDM (fusion deposition modeling) printers, which are recommended for beginners.  They have a low price, solid reliability, and are very easy to use.  So, don’t worry so much about the printer process as it is automated to follow the instructions sent in the g-code file.

As your file is sent to the printer, it will analyze the g-code, and will start printing the object by pulling the filament material through a tube. Think hot glue gun, 3D printing is very similar to this process.  It heats the filament as it pulls it through a tip called an extruder.  The extruder is attached on an axis and moves to lay down layers one at a time.  Each thin layer is added one layer added on top of another until the object is fully formed.

To prevent the object from shifting or moving during the printing process, the base of your 3D printer is usually heated or taped so the base of the object is secure and will not move.

There are many different types of printers, but the most common are the FDM type which has been mentioned.  A second type of printer is an SLA(stereolithography) type printer, which is less common than the FDA type, due primarily to price. You can read more about 3D printer types by reading our other articles.

What can I print with a 3D printer?

You’ve now learned the three basic steps of the 3D printing process:  create a model, save the model as a stl file, run it through a slicer, and then send it to the printer.

The obvious next question is, what can I print with a 3D printer?

Fortunately for you, there are no limits to 3D printing. If you can model it, you can 3D print it. The only limiting factor is the printer itself.  Not all printers are created equal, sounder stand the limitations of your printer will determine truly what you can 3D print.

Other factors to consider are size, time and materials.

Time:  the bigger the item, the longer it will take to print.

Material:  the purpose of your object will determine the material you use.  Material comes in all sorts including plastic, nylon, carbon fiber, wood, metal, cement, chocolate and other options.  You would also need to understand your printer and what types of filaments it is designed to print.

Anything can be printed with the right material and the right printer, golf balls, mugs, dresses, car parts, chess pieces and yes even a house.  You are only limited by your creativity so let it run wild and see what you can create.

What is the Process for 3D Printing?