Is 3D Printing Dead? My Opinion 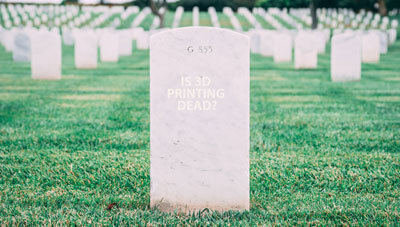 In the mid-2000s, 3D printing was all the hype. Many projected it to be the next big thing in technology. However, in recent years, a lot of the conversation revolving around 3D printing has quieted. 3D printing may no longer be trending, but that is just what happens after the burst of excitement over technology that is new to the general public dies down.

3D printing is far from dead. On the contrary, it is still growing and evolving in both the private and public sectors and even garners massive federal support. As new materials, techniques, and applications are explored, the 3D printing industry continues to advance.

While initial hype has undoubtedly diminished, that does not mean that it’s time to throw 3D printing to the wind. As long as there is something left to learn, there also exists room to improve and grow. If you want to find out why 3D printing is not dead, learn about some benefits of 3D printing, and discover how 3D printing is likely to grow, then keep on reading.

Why 3D Printing Is Not Dead

3D printing has extended beyond being a fad for niche enthusiasts. While 3D printers haven’t become a staple in our homes, they have indeed found their place in other markets. And it does not show any signs of stopping or even slowing down.

You do not have to take my word for it; the evidence is there.

Over the past decade, such 3D printing technologies have permeated a broad range of industries, from construction and manufacturing to precision medicine and aerospace. Forbes wrote an article as recent as 2019 on 12 Revolutionary Ways 3D Printing Is Changing The World.

Does that sound like a dying industry to you?

Benefits and Applications Of 3D Printing

With a range of materials and flexibility to create products on both smaller and larger scales, 3D printing provides unique opportunities. The very nature of an additive process leads to certain distinct benefits compared to other manufacturing methods.

Such characteristics prove advantageous for manufacturing companies of all sizes. Present-day increases in investments for development seek to take full advantage of these benefits while combating 3D printing weaknesses that currently hold the industry back.

Opportunity for Further Innovation and Growth

In the past, 3D printing’s potential has been staunched by limitations including, but not limited to:

Consequently, 3D printing has typically been limited to low to medium volume productions. However, exploration and discovery have led to new technologies and strategies that seek to address and alleviate such limitations.

For instance, deploying printers in mass to work in tandem with another can produce thousands of parts per week. Machines are also becoming increasingly skilled at using a variety of materials, allowing for customization and versatility.

Composite 3D printing is another example of a niche capable of taking off, streamlining processes, and cutting costs for industries that benefit the most from utilizing the strong but lightweight material. In 2019, some of the larger composite 3D printing companies were able to raise millions of dollars in funds to investigate such possibilities.

According to a 2019 congressional research service report, 3D printing technologies will likely increase in usability, thanks to new materials, lower production costs, and issues with quality assurance being addressed.

“Applications will play a central role in driving most growth in the industry.”

Innovations in 3D printing are not solely supported by the private sector. Government agencies have also provided funding for basic and applied research and development.

Some of these agencies include:

The wide range of support for additive manufacturing processes will likely lead to a surge in innovation and 3D printing efficacy.

A Brief History Of 3D Printing

Looking back at how far 3D printing has come helps us get a better look at its potential and growth. Many people are unaware that 3D printing is not at all a newer technology. In fact, it has been around since the 1980s, when the first major patents were filed. The history of 3D printing can be broken down into three major periods:

3D printing has not made quite the revolutionary impact that some expected. For instance, 3D printers have not become home staples. Nonetheless, 3D printing has made its mark on certain industries, and we have yet to see its ceiling.

As technologies improve and our understanding of 3D printing materials and applications increase, we will only see the industry continue to grow and influence our production capabilities. The numbers prove that 3D printing is on an incline and definitely not six feet under.

There are two types of people who proclaim that 3D printing is dead.

Neither has a comprehensive understanding of what 3D printing has to offer or how much impact it has had on many industries.

Sure, we do not live in a world where every home office features a desk area dedicated to 3D printing, and that may never be the case. But that does not mean the technology has reached a dead end. We have yet to discover many applications and innovations, and we have not seen all that 3D printing has to offer. And personally, I could not be more excited to see what comes next!

Is 3D Printing Dead? My Opinion