What is the History of 3D Printing? 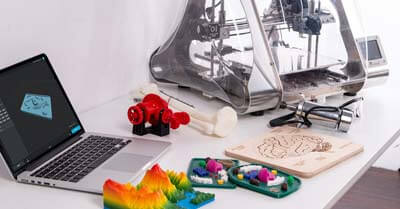 Many people think of 3D printing as a cutting-edge technology. The truth is that while there have been many important innovations in 3D printing over the past ten years, the technology was first developed much earlier than this. In fact, the history of 3D printing goes back almost four decades.

When was 3D printing invented?

3D printing was invented in 1981 when Dr. Hideo Kodama, a scientist at the Nagoya Municipal Research Institute, applied for a patent for a rapid prototyping device. The device used photopolymers in order to build up 2D layers of a model. Dr. Kodama's application was never approved and without funding the project stalled.

In France another group of scientists began a similar project. Alain le Mehaute was a researcher at Alcatel in the early 1980’s working on fractal geometry. He was researching how it would be possible to produce complex objects.

Another scientist, Oliver de Witte, working in another subsidiary of Alcatel, had come to understand through experimentation that it was possible to cure liquid monomers into solids using a laser.

The two colleagues then approached Jean-Claude Andre, at the National Center for Scientific Research (CNRS) but were met with frustration. CNRS chose not to approve the research, stating he felt there wouldn't be sufficient practical applications for the technology. The French scientists then tried to file a patent, but were unable to do so due to lack of funding.

1984 came a breakthrough for 3D printing. It was in this year that Charles Hull would invent Stereolithography. At the time Hull was working for a furniture manufacturer. He found the time it took to develop custom parts frustrating. So, he took this frustration and developed a process that used UV lamps to cure photosensitive resin. By building up layer upon layer from the bottom he discovered it possible to build small batch, custom parts.

This idea proved invaluable for inventors who could now rapidly produce prototypes of new products or parts without the typical heavy upfront cost of traditional manufacturing.

Hull was provided with his own lab in order to develop this process. He subsequently applied for a patent calling the process stereolithography. Unlike Dr. Kodama and the French trio, Hull's patent was actually successful. The patent was issued in 1986. Hull then set out on his own, starting the company 3D Systems. The first product, SLA-1, was introduced in 1988.

3D printing at this time hinted at the future promise of the technology but it was yet to be perfected. The high cost of early 3D printers meant they weren't suitable for inventors at home. What's more, objects printed with these printers would frequently warp.

1988 saw the development of another key 3D printing technology. Carl Deckard, a University of Texas undergraduate, filed a patent for selective laser sintering (SLS). SLS allowed the user to build parts by fusing thermoplastic powder. Deckard's first SLS 3D printer was uniquely named Betsy and was used as a prototype to test the viability of the concept.

Another important patent was also filed during this period. Scott Crump, best known as the co-founder of Stratasys, submitted the patent for fused deposition modelling (FDM). While this would be the last of the three main technologies to be patented, it would become the most commonly used.

New possibilities for 3D printing reached the public consciousness in 1999 when for the first time a human received an implant from a 3D printed organ. The human bladder produced in a 3D printer was coated with the cells of the patient, minimizing the chance that the body's immune system would reject them.

It was during this period that 3D printing really started to become embraced by the open source movement. Dr. Adrian Bowyer developed the RepRap. The RepRap was one of the first low cost 3D printers. More importantly, the RepRap was also capable of printing many of its own parts. The idea being that with one RepRap you can easily and affordably create many more.

Other trends would play their part to expand and spread 3D printing technology even further. In 2009 the patent for FDM expired. This set off a new wave of FDM 3D printing innovation. Desktop 3D printers started to fall in price, opening up the consumer market and broadening interest in the 3D technology.

The 2010's was the decade when 3D printing became widely known by the general public. This is one reason why many people view 3D printing as being such as "new" technology, despite its four-decade old history. In fact, President Barack Obama included 3D printing as a key futuristic technology in his 2013 State of the Union speech.

2010 was also the year that saw the first car manufactured using additive manufacturing. This was the Urbee, a futuristic looking hybrid vehicle. The car was developed by Urbee, working in partnership with Canadian engineering group KOR Ecologic.

This wasn't the only "large scale" 3D printing breakthrough that decade. 2018 was the year that the first family moved into a 3D printed home. The basic structure of the home only took 54 hours to print and was approximately 20% cheaper than using traditional building methods. The four-bedroom house involved the collaboration of the University of Nantes with the city council, and a local housing association.

In 2019 over 1.42 million 3D printers were sold and it is estimated that over 8 million units will be sold by 2027.  There is no wonder this technology is considered a game changer today and even more so in the coming years.

What is the History of 3D Printing?