Marlin vs. Repetier: Which Firmware Should You Choose? 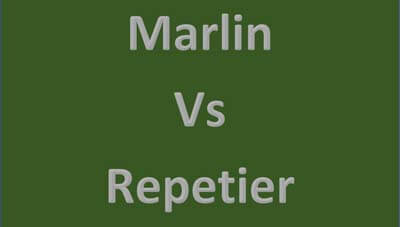 If you’re new to the world of 3D printing, you may have heard of both Marlin and Repetier firmware without knowing the difference between the two or even what firmware even has to do with 3D printing in the first place.

Both Marlin and Repetier have extensive printing features that can be useful in 3D printing. However, Marlin has more available tutorials and a more robust community to fall back on for support during 3D printing projects. This makes Marlin the better of the two technologies, especially for novice 3D printmakers.

Marlin firmware and Repetier firmware are both well respected in 3D printing, but some 3D printmakers prefer one or the other since the two types of firmware are quite different.

Here is how Marlin firmware sizes up against Repetier firmware:

Both Marlin and Repetier have comparable inputs for programming a 3D printer. Still, Repetier can handle many more extruders than Marlin, while Marlin has a wider movement range and comes standard on much more 3D printing equipment.

Marlin also has the benefit of being supported by a robust community support system, while the support behind Repetier is a bit more barebones. However, both pieces of firmware are open source, so there’s no major risk involved in experimenting with both, depending on your needs as a 3D printmaker.

Marlin is the easier firmware to work with because it comes standard on so much 3D printing equipment—you don’t have to flash your printer with new code if you already have Marlin to begin with. Below, you’ll find out more about Marlin and Repetier firmware and what these open-source programs can do.

What is Marlin Firmware, and What Are Its Features?

Marlin is a firmware that is open source and is designed for use on RepRap models of replicating rapid prototypers or 3D printers. (Source: Marlin) The computer code for Marlin was derived from the previous code developed in Sprinter and GRBL. Because of its reliability, Marlin firmware comes standard on several brands of 3D printer, including the following companies:

Here are some of the advantages of using Marlin firmware:

Along with these benefits, Marlin firmware also offers the following features:

Not only does Marlin have tons of useful features for 3D printing projects, but it also has one of the most dynamic support communities in the entire field of 3D printing. Chances are, if there’s a project out there you want to design on a 3D printer, there is a Marlin user who can help you figure out how to pull it off. This kind of robust support can be useful when you’re still learning the ropes with a fledgling technology like 3D printing.

What is Repetier Firmware, and What Are Its Features?

Repetier firmware is a 3D printing firmware designed to work in conjunction with most Arduino-driven circuit boards. While Marlin firmware might have many cool features, Repetier is known for its reliability and has been a staple on the 3D printing market for several years.

Here are some of the circuit boards that are supported by Repetier firmware (Source: Repetier):

Here are some of the advantages of using Repetier firmware over other 3D printing firmware like Marlin:

Here are some of the features of Repetier Firmware:

Which Is Better—Marlin or Repetier?

While both Martin and Repetier have good reputations in the 3D printing community, if you ask 3D printmakers, most of them are likely to go with Marlin over Repetier.

Here are a few reasons that Marlin is often chosen over Repetier:

There are many reasons why Marlin wins out over Repetier when it comes to choosing the better firmware. Ultimately, it comes down to the fact that Marlin is more flexible and can be used effectively by a larger pool of 3D printers.

How to Identify the Firmware in Your 3D Printer?

So, you want to know what firmware your 3D printer is running, but you’re not sure which it is. What are some ways you can use to identify the firmware in your 3D printer? (Source: Quora)

Can You Change the Firmware in Your 3D Printer?

The short answer is yes, it is possible to swap to a different firmware in your 3D printer if you’d like to switch to Marlin from Repetier or vice-versa, but there are a few caveats. Reconfiguring the firmware on a 3D printer is not easy and is a task that should be left to seasoned professionals who are used to dealing with the computer code on a 3D printer. Otherwise, you might accidentally render the entire 3D printer unusable.

It’s also possible that changing the firmware in the 3D printer is not necessary. If you’ve decided to change the firmware in your 3D printer due to printing quality issues and issues with printing consistency, these problems can usually be addressed by re-calibrating the printer rather than re-programming it entirely.

Here are some good reasons why you might want to swap out your firmware (Source: All 3DP):

Can You Swap a Proprietary Controller Board on a 3D Printer?

If you need a replacement controller board for a 3D printer, it’s a good idea to check with the original manufacturer. In a case like this, the manufacturer is likely the only good source of the control board you need to get the 3D printer operational.

Tips for Swapping Firmware in Your 3D Printer

If you’ve decided to swap out the firmware in your 3D printer, here are a few tips to help you avoid running into trouble while working on your printer:

Swapping out the firmware on your 3D printer is doable in most cases, and there are many tutorials available online to help you pull it off.

Marlin Is a More Versatile Firmware for 3D Printing Than Repetier

Both Marlin and Repetier have features that could recommend them to 3D printmakers. Still, in the last several years, Marlin has stepped up in its ability to support its firmware. The quality of the coding is endorsed by this firmware’s use in several major 3D printing manufacturers.

Marlin is good for novice and advanced 3D printmakers alike. For the beginners, it is a standard tool with a helpful community and knowledge pool. For veterans, it offers complex features that aren’t available in any other firmware.

Marlin vs. Repetier: Which Firmware Should You Choose?