What Does PLA Stand For? 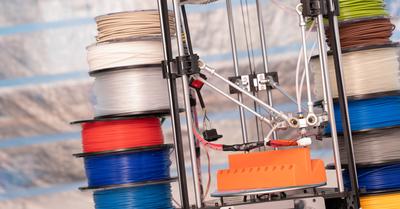 PLA is a commonly used term in the 3D printing sphere. It's a bioplastic that can be used to develop 3D printed items. But what does PLA stand for?

PLA stands for "polylactic acid." It is a form of plastic that's made using renewable sources. Due to its low price and ease of use, PLA filament is commonly used in commercial and large-scale 3D printing projects such as building prototypes of mockups in architectural projects.

If you are looking to use a 3D printer for the first time, you will need to know more about the PLA filament since it is widely used. Why PLA and not any other filament? Well, PLA is better for your wallet and can help you come to grips with the ins and outs of 3D printing.

While there are many websites and articles dedicated to 3D printers, there is very little information regarding filaments used in 3D printers, and more importantly, the PLA filament. We have gone through numerous trusted sources and have interviewed experienced 3D printer users to find out all there is to know about PLA in 3D printing. Let's begin.

PLA was invented in the 1920s by Wallace Carothers, an American scientist best known for developing nylon and neoprene for the DuPont chemical firm.

The fermentation of maize starch produces this thermoplastic polymer. The natural product is crushed to extract the starch from the maize and mixed with acid. The starch in this combination is broken down into dextrose (D-glucose) or maize sugar. Glucose fermentation yields L-lactic acid, which is the primary constituent of PLA.

This substance is classified as a pseudoplastic non-Newtonian fluid, as in, its flow resistance will alter as a result of the stress it is exposed to. In other words, PLA is a fine-cut material, which means that when you add tension to it, the viscosity decreases.

What Exactly Is PLA?

PLA is a plant-based plastic that is commonly manufactured with the raw material cornstarch. The monomer is usually made from fermented plant starch and is the most often used natural raw material in 3D printing. Technically, it is a thermoplastic aliphatic polyester. As in, PLA is a totally biodegradable thermoplastic polymer manufactured entirely of renewable basic components. This means, among all 3D printing materials, PLA is one of the most extensively used additive manufacturing materials for filament generation.

PLA is a bioplastic used in 3D printing utilizing the FDM (Fused Deposition Modeling) method. It is one of the standard materials for this technology, along with ABS (Acrylonitrile Butadiene Styrene). Because these are the two most popular plastic materials available for consumer printers, people are tempted to compare them. PLA plastic is simple to work with and has some intriguing mechanical qualities.

Even though PLA allows you to 3D print large pieces, bear in mind that you'll need to follow certain design rules to avoid any issues during the additive manufacturing process. This is why it is crucial to check the material design rules when you create your 3D file and before sending it to be 3D printed.

What Is the Purpose of PLA?

PLA quickly gained popularity as a result of its cost-effective production from renewable resources. PLA plastic material is delivered on a spool and fed into the extruder head, where it is melted and placed in a continuous extrusion on the printing tray. Although this material is translucent in its original state, spools of the colored filament may be used to create a variety of colorful objects. This material shrinks less than ABS when it cools, resulting in high geometric stability during the production process.

PLA is a good choice for product development since it can be utilized for quick prototyping. The major benefit of PLA is large-scale 3D printing, which may be beneficial for a variety of applications. With this material and a huge 3D printer, you can produce professional and industrial pieces measuring 1m x 1m x 1m! PLA material offers a high level of strength and rigidity, making it suited for demanding industrial applications. The material is ideal for 3D printing huge objects in the domains of building and construction, as well as marketing displays, exhibits, and signs.

This 3D printing filament is a cost-effective and adaptable material. Prototypes, patterns, tooling components, and end-use parts are all simple to make using it. However, it should be noted that this material is not suitable for applications demanding high humidity (more than 98%) or high temperatures (greater than 60°C).

PLA has garnered widespread popularity in additive manufacturing due to its unique mechanical characteristics and the fact that it is derived from renewable resources. It's a popular choice for 3D printing novices since it's a simple material to work with. PLA, which is classified as a semi-crystalline polymer, melts at 180°C, which is lower than ABS filament, which melts between 200°C and 260°C.

This implies that a heated printing bed isn't required when printing with PLA, and a closed chamber isn't required either. The sole disadvantage is that it has a higher viscosity than ABS filament, which might block the print head if not handled properly.

The mechanical qualities of this filament are not the same as those of ABS filament; the latter is significantly more robust and flexible. On the other hand, PLA has a higher heat resistance and is commonly used in the food sector. Even if a project is not complex, it is still suggested to use it because it is easier. For example, PLA does not need extensive post-processing. If necessary, it may be treated with acetone, and the supports are typically simple to remove. Because the initial layer of this material may have issues, it's a good idea to put sticky tape on the printing tray to make it easier to remove after the item is done.

There are numerous producers nowadays since it is a popular material in 3D printing. NaturaWorks, an American company, manufactures biopolymers, and Corbion, a Dutch company, develops high-performance PLA resins.

The pricing of PLA filament is presently variable based on the colors and qualities desired. Hybrid filaments might raise the price, which is often the case when it comes to wood etc. On average, a kilogram of desktop filament costs between $25 and $80. Some can make pellets, lowering the cost of the material significantly. But it doesn't end there. You'd expect anything involving 3D printers, which is one of the most cutting-edge technologies, to be a bit more complicated than that, and it is.

The overall cost of the PLA filament will depend on the following factors:

Expanding on that last point, for instance, generic PLA filaments are the cheaper of the two and are mostly used by novices or businesses that want to perfect their printing process. On the other hand, specialty PLA filaments are more expensive because they contain special features such as glow-in-the-dark or magnetic PLA. These extra additions to the PLA filament also bump up the cost and should be considered when choosing a PLA filament for your 3D printer.

And as if that wasn't enough, the 3D printer you use virtually determines your options – open-source or manufacturer's own product. This is one of the main reasons why you need to consider the cost of the filament that you will be using, mainly because while you may only pay once for the 3D printer, the PLA filament is going to be an ongoing expense that you will need to consider, especially if you are providing 3D printed models as a service.

What Does PLA Stand For?