What Is 3D Printing? 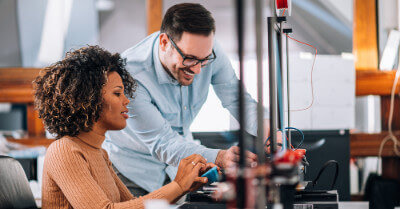 3D printing saves on cost as it makes creating a single item as cheap as creating hundreds of them. Today, we use 3D printing in creating models in industries.

3D printing involves manufacturing things but differently from the ‘traditional method. It is fast and involves low setup costs. It can create more complex geometries than before using an ever-expanding inventory of materials. It is used extensively in engineering, medicine, architecture, education, entertainment, and prototyping.

In researching and writing this article, we obtained information from innovative companies that use 3D printing, such as Boeing, Ford, Nike, American Pearl, and Hasbro.

What is 3D Printing?

3D printing is a manufacturing process that forms an object from a software design. This process works by adding thin layers of plastic, cement, or metal in liquid or powder form and fusing them to create objects of different sizes, colors, and shapes.

This manufacturing process is additive and uses the traditional inkjet printer methods, albeit in 3D. To create a 3D part or object, it takes a combination of powder materials, good software, and precision tools. Below are the steps that 3D printers use to bring the ideas to life:

The first step in every 3D printing process is modeling. Modeling allows the printers to tailor the product as a perfect replica. This ability for precise designing is why we use 3D in many industries.

After creating the model, the next step is to slice it. Regrettably, the printers cannot perceive 3D like human beings; therefore, the engineers have to slice the model into various slices to create the end product.

The software used to slice the model scans all the layers and instructs the printer on creating each layer. The slicers also instruct the printers on where to fill up a model. This fill strengthens and shapes the object. After the model has been sliced, you can then send it to the printer for actual printing.

A 3D printer acts as an inkjet printer, where wax is dispensed layer by layer, waiting for each to dry before the next one.

The printer adds 2D prints on top of each other to create a 3D object. Here are some examples of materials used by a 3D printer;

This process may take a few hours for simple prints like a ball or weeks for complex projects like a home.

3D printing is categorized into seven groups which are;

Material jetting works similarly to an inkjet printer, except it deposits layers of ink rather than layering it down on a page. You should allow each layer to cure before laying the next one. This process is precise and the most expensive 3D printing method. However, it permits the creation of colorful parts in the material.

The second type of 3D printing is binder jetting. It involves depositing a thin powdered layer of material such as ceramic on the platform, after which adhesive binds the particles together.

The layers are hence built part by part, and once it is complete, it is processed further to complete the build. You may use metal parts for post-processing. Binder jetting in 3D metal printing is generally used in ceramic molds and color prototypes.

In this 3D printing, we use thermal energy to fuse different layers of powder to form more layers. These layers are placed over each other to create one part. It is noteworthy to mention that powder bed fusion covers the melting and sintering process.

This 3D printing uses thermal energy to fuse wire as it is deposited. In this process, layers are placed vertically to create an object.

This process is also known as fused deposition modeling. A spool of filament is fed to an extrusion head that has a heated nozzle.

The head heats then lays down the softened material to cool as a layer. When it cools, it creates a layer, and the build platform moves down to allow the next layer. This process saves cost but requires post-processing to create a better finish.  Unfortunately, the parts are not strong in one direction, thus unbefitting for vital applications.

In sheet lamination, there are two technologies: ultrasonic additive manufacturing (UAM) and laminated object manufacturing (LAM).  UAM is a process used with aluminum, titanium, and stainless steel using low energy and temperature. LOM, on the other hand, layers materials to create parts that have aesthetic and visual appeal.

This process consists of two techniques: digital light processing (DLP) and stereolithography (SLA). Both processes create parts by layering cured liquid resin in a vat. While SLA uses a single-point laser, DLP uses an image of each layer on a vat surface.

3D printing was innovated as an idea to accelerate product development by prototyping. Chuck Hull invented a 3D printer through Stereolithography Apparatus and patented it in 1984.

In the 1980s, others formed several companies that were important in the development of 3D printing technology. They are;

From the 1980s to the 1990s, the industry grew rapidly. The machines built were expensive and big. Their creators competed for contracts for mass-market manufacturers in the health, automotive, aerospace, and consumer goods industries.

A decade after 3D took off; 3D printing became affordable due to development in materials, the ending of patents, and fierce profit competition. In the early 2000s, 3D came to people from the heavy industry.

At the beginning of the 21st century, the excitement around 3D printing had disappeared from the media but increased in businesses. Today, many companies are producing 3D printers and offering many services in 3D printing technology.

3D printing is applied in many industries including:

Reductions in weight and costs have led to the popularity of 3D printing in automotive. This allows for quick prototyping of new parts for testing or manufacture on a small scale. For instance, if one part is unavailable, it can be produced. Alternatively, parts can be created overnight and tested before manufacturing in large quantities.

Benefits of 3D printing for Automotive

Since 3D printing creations are light but complex, they are used across the aerospace industry. Instead of building one part for different components, 3D allows one whole creation reducing material and time wastage.

Benefits of 3D printing for Aerospace

The medical sector has also gained via 3D creations. For example, it is quick to make hearing aids from a digital file after matching it with the patient’s body. It reduces the costs and production times greatly.

The benefits of 3D printing for medical

What Is 3D Printing?

What Is Polycarbonate Glass?

What Is Gantry Height Cura?

What Is Layer Height In 3D Printing

3D printing is a complex subject with plenty of terminology to discuss. An example of this one of the core phrases in 3D printing: layer height.

While the process of being able to print with plastic makes 3D printers a unique tool, there are obstacles that can result in imperfections – like a retraction.

There are many terms in 3D printing that aren't quite what you expect them to mean. Let's talk about slicing and what it means in the world of 3D printing.