What Is 3D Slicer Software? 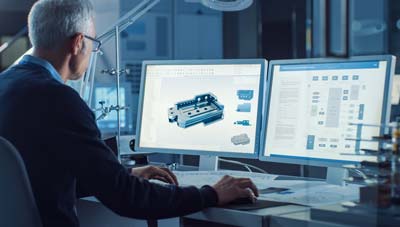 3D Slicer Software is an integral component in 3D printing. Without 3D Slicer software, printers would not know how to print.

Some 3D slicer software does both.

There are hundreds of 3D Slicer software options out there. How do you know which one is for you? Why can’t you use a 3D printer without slicer software?

Each 2D slice exists as its own separate layer. The layers are sent to the printer as individual steps in the process and are accompanied by linear instructions for each component of the printer.

The instructions for each layer must be detailed. Slicing software breaks down the printing process as directly as possible. The software will describe the geometric aspects of the object. Which is essentially how the object will be built. This will also include information about the structural aspects of the object to be printed.

Slicer software also provides the printer instructions on how fast to print each layer, what temperatures to use, and how thick to make each layer. Some of the more advanced slicer software technologies can also take into account the intended use of the object being printed.

Are There Different Types of 3D Slicers?

There are two main types of 3D slicing software. The biggest difference between them is that some slicer software may require you to get additional software to be able to communicate with a 3D printer. The two types of 3D Slicers are:

3D slicer software that does not contain user interface software is considered a pure slicer program. These programs only take a 3D model and slice it into layers but cannot communicate the code to the printer and control the parameters for the print job.

With pure slicers, user interface software would be needed in order to instruct the computer on the required temperature, thickness, speed, and other parameters for the print job.

Due to their limitations, pure slicers aren’t very common. Some 3D printers will even come with slicer software but you almost always have the ability to choose your ideal software.

3D slicer software that includes user interface functionality is known as combined slicer and control software. These 3D slicer programs will all have the ability to take a 3D model and convert it into 2D layers. They will also have the user interface software that will allow you to control all of the parameters of the print job.

These are just a few of the printer settings that a 3D slicer program with user interface software will allow you to control.

These 5 are only touching the surface of the 3D slicer options on the market. When selecting a slicer software you will want to consider not only your skill level but if you have any specific needs. For example, there are slicer options that only deal with  medical 3D printing.

Are There Alternatives to 3D Slicers?

3D slicer software translates the 3D model created by a user into code. This code communicates with the 3D printer. It explains the printer settings for each layer of the object and the object as a whole. This process is integral to printing.

3D slicers that include user interface software provide 3D printers with the specifications of the object printed. This includes things like the printing speed, the object’s thickness, and the temperatures required to produce the object. Some slicers can add additional commands based on an understanding of the object being printed.

Some 3D slicer software programs may not work well with certain 3D printers. If you are noticing issues with your 3D slicer program crashing, you may need to switch to a different platform. Sometimes you may just outgrow a software or find that you have a specific need not available in your current software.

Without 3D slicer software programs, 3D printers would not be able to translate a 3D model into the directions the printer must follow to produce the desired object. Therefore you must have a 3D slicer to use a 3D printer.

If you haven’t purchased a 3D printer yet you have the option of selecting a 3D printer that comes with 3D slicer software. The best 3D slicer software will vary from user to user, especially depending on skill level. The good news is, with so many free options, you can just keep upgrading as you learn more.

What Is 3D Slicer Software?