What Is The Extruder In a 3D Printer? 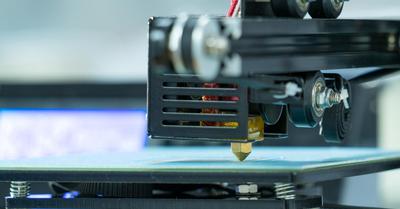 What is the extruder in a 3D printer? Well, to put it simply, it’s a crucial part of the whole 3D printing system, which is why you need to know all about it.

The extruder is the part of the 3D printer that draws in the filament, melts it, and then pushes it out. At times, it may also solidify the material that’s in powdered form by way of a bonding agent. Due to the function it performs, it’s one of the most important parts of a 3D printer.

In a 3D printer, the extruder is so much more than just a fancy filament gun. While it is a small component of a much larger 3D printer, it is responsible for designing objects in the 3D printer. What’s more, there are also different types of extruders, which we’ll look at in this article.

Since this is a much more complicated component of a 3D printer than it looks, we have scoured the web to find authorities in the 3D printer niche to discover what they have to say about the not-so-humble extruder. So, without any further ado, let’s dive straight into it.

‍What Is Extrusion In 3D Printing?

While 3D printing is considered to be rather new technology, the process of extrusion was first developed in the 80s by S. Scott Crump. In 3D printing applications, the extrusion system can build objects by laying down the printing filament in layers.

“Extrusion” is a term that you may have heard of from folks who talk about 3D printers, but have you really thought about what the extruder in a 3D printer actually does? We thought so too, which is why you’re going to learn all about the extruder and its role in the 3D printer right here. But first, let’s try to understand what the process of extrusion means in the context of 3D printers.

Under ASTM International standards organization, the name “extrusion” has been given to the process in which the filament in 3D printers is dispensed via the nozzle. It is also known as “Fused Deposition Modeling.”

The direct extruder and Bowden extruder are two variants of the extruder that’s used in 3D printers. Both come with their strengths and weaknesses. The following is a quick breakdown of these two types of 3D printer extruders:

Both direct and Bowden extruders have their pros and cons, which is why it is best to consider all of the factors when choosing the type of extruder you want for your 3D printer.

Direct extruders provide better responsiveness because of their short distance from the hot end to the drive mechanism. The shorter distance between the two ensures better retractions. This also means that the direct extruder needs less torque to extrude the filament to the hot end as compared to the Bowden extruder.

In this way, direct extruders translate into better, cleaner prints and do away with many of the issues that operators of 3D printers run into, such as oozing or stringing during the printing process. Another benefit of the direct extruder is that it requires less torque, which means it can work on a smaller motor or a lower current setting on a normal size motor, resulting in better energy saving. This is one of the reasons why direct extruders are normally used for printing with flexible filaments such as PLA or TPU. It should also be noted that direct extruders often use two hot ends, leading to restrictions in print width.

What Is The Extruder In a 3D Printer?