Would You Eat a 3D Printed Steak? 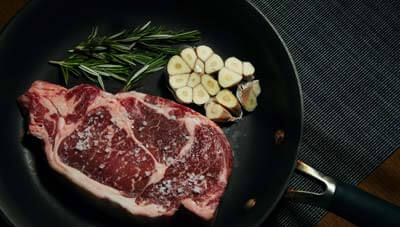 A bizarre question no doubt, but stick with me and read it through so you can fully understand and appreciate the question “Would you eat a 3D printed steak?”.

Then and only then are you prepared to give an honest answer.

The International Space Station has a 3D printer and uses it to print spare parts.

And even houses are being 3D printed as we speak.

Your head may be spinning at this point, and you may be asking yourself what is this?

If this is your first exposure to 3D printing that is understandable as it is a relatively new technology.

So, here is all you need to know.

It was first invented back in the 1980’s, but gained significant attention in the past 10 years.  3D printing is an additive manufacturing process that prints objects by adding layer upon layer of material to form an object.  Today, just about any real or imagined object can be 3D printed.

3D printing has grown so much in popularity that it isn't just for engineers and manufacturers. It can now be found in schools, offices and even in the home as it has a huge hobbyist following. In some ways it has become so easy that even children and learning 3D printing.

Have you heard of the “Toy Box”?  It’s a 3D printer designed for a child.  The Toy Box comes ready-made to be plugged and printed, all you need is a computer and access to the website. Down load a predesigned model, hit print, and in as little as 5 minutes you can have a simple toy truck printed.  It’s that easy.

As 3D printing technology has grown in popularity and advancement you might be surprised to learn that even food can be printed.

And that leads us into the question “would you eat a 3D printed steak?”.

Just recently it was announced that an Israeli restaurant will serve 3D printed ‘steak’.

I’m sure you can understand printing spare parts or other objects, but food, and more importantly an American favorite – steak.

I posed this question to an unscientific collection of people, my family, many of whom are lovers of steak.  After the gags and snorts, the answer was an overwhelming – that steak is not going on my grill.

Well time will tell how fast this 3D printing food phenomenon will last, but based on the industry trend, it might just be here to stay.

So, lets answer a few questions you may have about 3D printing steak.

Will the 3D printed steak be just like real steak?

Yes, at least some think so.

The Israeli steak is being called “Alt-Steak” and will have the appearance, the flavor and the texture of real meat.

One food-tech start up thinks vegan steak will fool your taste buds.

If you are still skeptical, students at a Barcelona culinary school said the 3D printed steak was worth the 20-minute printing time.

However, others say it’s hard to recreate the taste of a traditionally prepared meat that uses alternative ingredients.

There is still work to be done, but given the speed at which the industry is changing, it won’t be long. The biggest limitation right now is the time required to print. But that is a problem that certainly will be solved.

What is the 3D printed steak made out of?

A 3D printed steak is made of a mixture of soy, pea proteins, sunflower oil, coconut fat, and other natural colors and flavors.

What is a positive of 3D printed steak?

Some feel this is going to revolutionize the food industry.

It is anticipated it would reduce the environmental impact of the current meat industry that is responsible for 14.5% of anthropogenic greenhouse gas emissions.

It would reduce the amount of water used in the western United States which accounts for about one-third of the water used.

It eliminates the risk of virus transmission as it is produced in a controlled environment.

And finally, it helps solve a growing demand for meat which is expected to double in the next 20 years. The current system doesn’t have the capacity to meet that level of demand.

What other foods are currently being 3D printed?

Chocolate is being used as a 3D printer material.  It works beautifully as an ingredient or material for 3D printing because it melts and cools easily. Because of this, it is used to produce uniquely designed desserts.

Sugar candy is also being printed as it often only needs powdered sugar and water.

3D printers also are a great novelty at parties since you could print pancakes, mayonnaise or pasta into the shape of your choosing.

Since 3D printed food consists of edible ingredients and is prepared in a normal food-safe manner and then extruded through a nozzle onto a surface it is no more dangerous than any food you may eat at a restaurant.

So, the question still remains, would you eat a 3D printed steak after what you have learned.  Your answer may still be the same and that’s understandable. Spam and corn beef hash probably never took off in the beginning either, but over time they won over their fans. I imagine in the end if 3D printed steak finds its way into your local restaurant you may be tempted to at least give it a try, and if you do – maybe just maybe you will become a fan.

Would You Eat a 3D Printed Steak?