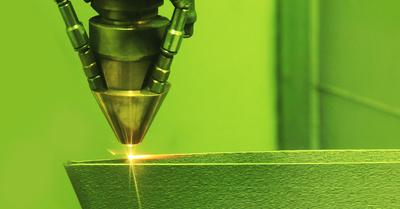 3D printing is becoming more and more advanced as time goes on. Modern systems can even 3D print metal, but how does it work?

3D printing metal works in much the same way as any other type of 3D printing — using an additive manufacturing process in which layer after layer of metal powder is added to one another. During the process, the powder is heated and mixed with adhesive to ensure it bonds with the layer below.

The process of 3D printing is relatively new in the grand scheme of manufacturing, and it’s an exciting world with seemingly limitless potential. These days, 3D printing metal has even become possible. In this article, you’ll learn how 3D printing metal works as well as the types of things that you’re able to do with the ability to 3D print metal objects.

At the end of the day, 3D printing is our passion. And it’s something that we want to share with our readers. That said, we also want to make sure that the information we put out there for you is entirely accurate. To ensure its accuracy, we’ve combined our vast experience in 3D printing with the knowledge and experience of countless others in the field to come up with the article you see below.

Anyone that’s been following 3D printing since the beginning or who’s just gotten into it probably knows that the process began for certain composites and polymers. This is a fancier way of saying that 3D printing started as a manufacturing process that could create some fairly basic parts using plastics or pseudo-plastics, nothing that could really be put to the test and stand up to rigorous use.

But now that 3D printing metal has become a reality, the potential is through the roof.

As the technology gets more and more refined in the coming years, you’ll be able to potentially make just about anything with 3D metal printing that you can with any other type of 3D printing. And with that in mind, it means that the ability to create almost anything with 3D printed metal is possible.

Imagine the innovativeness and creativity of 3D printing in general combined with the strength, versatility, robustness, and durability of metal parts. That’s the world we’re living in now and it’s only going to get more impressive. So take advantage of this process from the start and see what doors 3D printing metal can open for you.

How Does 3D Printing Metal Work?

To keep it fairly simple at the start, 3D printing metal works in just about the exact same general way as any other type of 3D printing. As an additive manufacturing process, it starts at the base and just has layer after layer of the material (in this case metal) added to each other and fused together. While that’s all well and good for a general overview, 3D printing metal is of course a bit more involved than typical composites and polymers.

Like other types of 3D printing, printing metal starts in the same place — inside a computer. No matter what you’re 3D printing, it always starts with a design on a computer using computer aided design (CAD) software. In this software, you design your part, component, or assembly as a 3D model. This software then takes that model and transforms it into computer code in a language that 3D printers understand, known as stereolithography (.STL files).

Once the program is loaded into the 3D printer, the machine handles pretty much everything from there on its own. The printer takes the code from the .STL file and then begins by putting the first layer down of the design. After the base layer is added to the printer’s surface, it will continue printing layer upon layer until the final product has been created. This is where the magic happens within the printer, as it takes metal powder and adhesive and creates a solid metal 3D object.

The process is completed by using a laser in conjunction with the powder as it’s fed into the chamber. The laser pulses at extremely high temperatures to heat up the metal powder as it’s being laid down onto the layer below it. These high temperatures heat the metal of new powder coming down as well as the existing layer below it, allowing them to combine into one solid object.

3D printing metal is typically slower than other materials due to how thin the layers need to be if they’re going to seamlessly meld with each other. Each layer is usually less than a tenth of a millimeter in thickness, meaning that it takes ten layers just to create one millimeter worth of thickness — so you can imagine how slow the process can be to create any objects of substantial size.

The two most common processes used during 3D metal printing are Selective Laser Melting (SLM) and Direct Metal Laser Sintering (DMLS). The main difference between the two is how high the temperatures are and if the powder is actually melted during the printing process or just gotten hot enough to fuse with the layer(s) below.

What Can You Make Using 3D Printed Metal?

This is where the true beauty of the process of 3D printing metal really shines. There are honestly almost no limits to what can be created using 3D printing metal as long as it can be designed in a computer and feasibly created. Metal 3D printing can be used to create products that would otherwise be entirely impossible to create using any other method of manufacturing.

The ability to create such incredible products using 3D metal printing because of the ability to create intricate designs that just can’t be made any other way. During the printing process, the designer can include support structures such as lattices and other types of support that get printed right along with everything else and can then be removed after the product is finished. This unique ability is impossible with any other type of manufacturing, making it an invaluable ability.

3D printing metal is so important and such a big advancement in the field because metal products can be used in situations requiring more reliability and durability than other things can stand up to. This is especially useful in medical procedures, such as knee or hip replacements and even spinal repair. 3D printed metal parts can be created to specific shapes, designs, and tolerances to provide precise objects that can stand up to conditions that plastics and polymers would prematurely fail.

Now that you have an idea about how 3D printing metal works and what you can really do with this technology, let’s look at some of the pros and cons. Like anything else in the world, there are both advantages and disadvantages to 3D printing metal, here are the biggest ones of each.